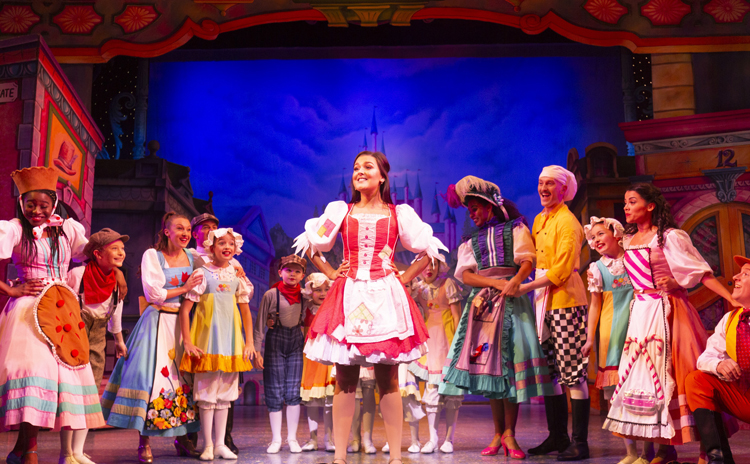 Cinderella gets a Manchester make-over at The Opera House this Christmas – it’s all magic and sparkle mixed with attitude and northern humour.

From Cinderella’s lively opening song about the theatre, the scene is firmly set in the city. And being the home of the nation’s favourite soap, we get a trip down the Corrie cobbles, with a sinister twist on the theme tune at the entrance of this year’s pantomime villains.

In Connor McIntyre, as Ugly Sister, Phelina, the Opera House pantomime may have bagged the biggest villain of them all. Known best as Coronation Street’s murdering, Pat Phelan, McIntyre’s towering presence is enough to scare the mums and dads, never mind the little ones. However, when paired with veteran entertainer, Les Dennis, his menace is tempered to pitch perfect. As my six-year-old theatre buddy shouted at the dastardly double act: ‘Boo, double boo (and to McIntyre’s Phelina) triple boo to you!’

Les Dennis, who started his career as a comedian, has a wonderful warmth on stage. As the villainous Michaela, we sense in another life she might be one of life’s good guys and is being reluctantly dragged along by her evil twin. Together the sisters are both hideous and hilarious, channeling Corrie’s Bet Lynch with their big hair and outrageous costumes.

But while the sisters may be the comedy queens of the show, the king’s crown goes to Rochdale comedian, Ben Nickless as Buttons. His dynamism fuels the whole show with laughter for all ages, bringing a host of famous faces to the party with his quick changing impressions.

For little-ones, Cinderella is the true star and Shannon Flynn’s princess builds instant rapport with the youngsters who recognise her from CBBC’s Friday Download and Shout Out Saturday.

Gareth Gates makes a sweet and unassuming Prince Charming, showing unexpected comedy talent in some of the show’s best slapstick moments. A real treat at the ball is hearing him sing the Righteous Brothers, Unchained Melody, with which he had a hit following his runner-up success in Pop Idol 2002.

Soul singer, Hayley-Ria Christian is another fine voice as Fairy Godmother sprinkling her magical fairy dust with every firework entrance, so everyone enjoys the ball.

And what a ball it is – the first act closes with Cinderella’s carriage, pulled by flying white horses, hovering high above the stalls. After that there’s still an hour of spectacle to go and I won’t spoil the surprise in Button’s parcel – enough to say it’s another treasure in this gift of a pantomime.

Cinderella is at The Opera House, Manchester from 8-30 December 2018.