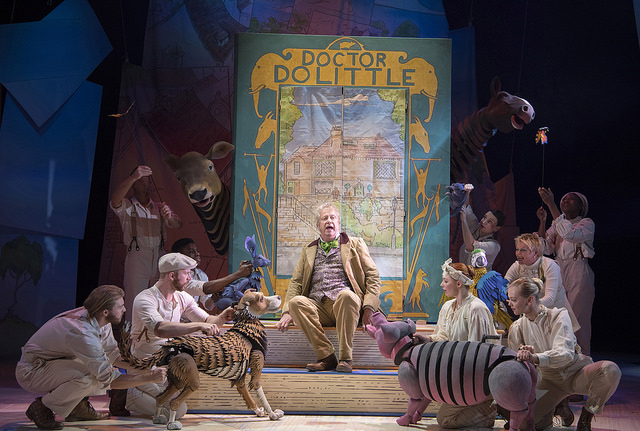 ‘I’ve never seen anything like it!’ exclaims Brian Capron’s Greatest Showman style circus owner, Albert Blossom on seeing the two-headed llama, Pushmi-Pullyu – and in years of reviewing, neither have I.

The puppets, and there are lots of them, are incredible. They range from the cute family pets and farmyard favourites to popular wildlife and the completely surreal inhabitants of Sea Star Island. The amazing, Doctor Dolittle can talk to them all.

It is 50 years since Rex Harrison created the role on film. The same Academy Award-winning song writer, Leslie Bricusse is behind the stage version and has written more original songs for this brand new, puppet-led production. There is a consistency to the new music that gives a feel it was always part of the bigger whole, but there is nothing new to rival the catchy, Talk to the Animals which everyone can sing along to.

It’s the song that first introduces us to the eccentric doctor, played with sensitivity and confidence by actor and comedian, Mark Williams. Williams has a gentle yet affirming presence on stage. His character prefers animals to humans, and his interactions with the puppets are where this show comes most strongly to life.

Doctor Dolittle yearns to be able to understand his animal companions better – if only he could talk to them. Hearing his musings, Polynesia the Parrot (Vicky Entwistle) steps in, teaching him the linguistic skills she’s learned over almost 200 years.

During his animal doctor consultations, Williams grunts, squeak and squawks at the animals before telling us what all the barks, neighing and quacking he hears in return mean. His new found understanding sees him conversing with a duck who flew into a ship’s mast while being nagged by his wife, giving an eye-test and spectacles to a short-sighted horse, and getting lessons in speaking more politely by a lobster. I love puppets and I love silly humour, so the two combined had me laughing out loud. But looking around my giddy response was unusual – it’s much more a heart-warming children’s show than a comedy.

Tom Piper’s sketch-book set design gives a nod to the Hugh Lifting’s original story, written in the trenches of WW1 to send some joy back home to his children. The escapism of it all is enchanting and there is a festive moral message at its heart about being kind to everyone, including the animals.

The message is as relevant today as it ever was. The search for eternal youth, a secret held by the Giant Pink Sea Snail, is another fantastical journey many still embark on. And perhaps the magical creatures by appealing to the young at heart have something to teach us about that too.

Doctor Dolittle The Musical is at The Lowry Theatre, Salford Quays from 11 December 2018 to 5 January 2019. See website for full tour details.

Read our interviews with the cast: Mark Williams, Brian Capron and Vicky Entwistle.