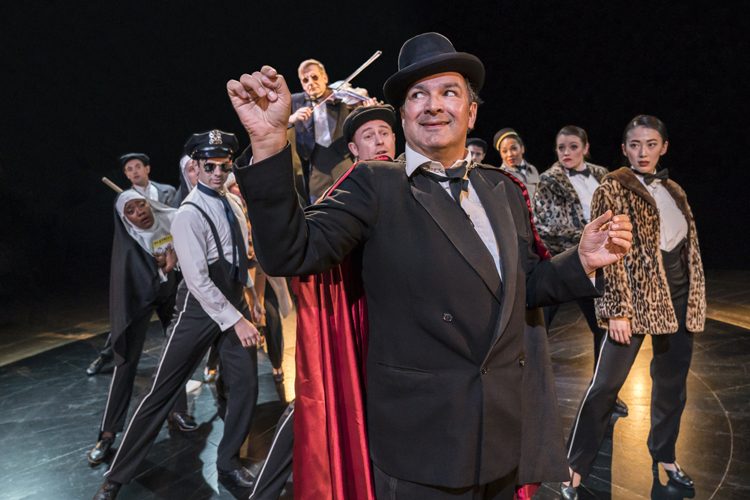 Badly bleached beehives, tap-dancing zimmer-frames and pigeon puppets – Raz Shaw’s new production of The Producers, at The Royal Exchange, is a riot of absurdity.

As if taking stage notes from one of the show’s more well-known numbers, Shaw keeps it happy, snappy and gay – it works a treat. His production grabs the audience by the funny bone and never lets go.

Even gags we’ve heard a million times before are welcomed as fresh, because when it comes to this kind of zany humour, it certainly is the way you tell ’em. And here the delivery comes with a huge dollop of physical silliness, at times so surreal it’s like watching a cartoon.

Max Bialystock and Leo Bloom are the hapless producers at the centre of the story. Well, Bialystock is a sleazy, failing, theatre producer and Bloom is his nervy accountant who, after hitting on a money-making scam, becomes enamoured with the idea of swapping his data-punching day job for the bright-lights of Broadway.

While working on the books, Bloom discovers it could be possible to make more money out of a flop than a hit. The plan is to produce a show so bad it closes after opening night leaving them with $1m of investors’ money to squander in Rio. So, Bialystock turns to his trusty investors – trading sexual favours for old widow’s cheques – and the pair set out to find the worst play ever written.

It’s more than 50 years since Mel Brooks told his story in an Oscar-winning screen play and the idea of a musical about Adolf Hitler is still in the worst possible taste. There is an irresistible edginess to the big number, ‘Springtime for Hitler’ – with all its sequins, tapping Jack boots, and giant swirling Swastika – that leaves you laughing in disbelief.

Julius D’Silva and Stuart Neal (bearing more than a slight resemblance to Matthew Broderick who created the role on Broadway) make a wonderful comedy pairing as Bialystock and Bloom. Despite his greasy comb-over and cardboard belt, D’Silva’s Bialystock is a likeable rogue.

When partnered with Neal’s constantly sweating and slightly slouched Bloom, we never believe they have enough wit between them to outsmart anyone – not even the old nymphomaniacs who Bialystock likes to think he’s charmed. And as for their new Swedish secretary, Ulla (Emily-Mae) she may be tidying-up the drooping roses but we sense she’s no fool. In Mae’s confident portrayal there is no #MeToo casting couch in this office.

While D’Silva and Neal’s manic energy drives the show, there is strong support from the rest of the cast, particularly Charles Brunton as cross-dressing director, Roger De Bris, whose comedy at times is so physically expressive he could be made of rubber. His flamboyant rendition of the narcissistic, ‘Heil Myself’ has the house in uproar.

Choreographer, Alistair David has done wonders to create a big musical feel in the intimate space of the Exchange’s in-the-round theatre. It’s outrageous, hilarious and ultimately harmless. And for Christmas, while it might not be a traditionally festive choice, this musical comedy provides some much needed fizz.

The Producers is at The Royal Exchange Theatre, Manchester from 30 November 2018 to 2 February 2019.