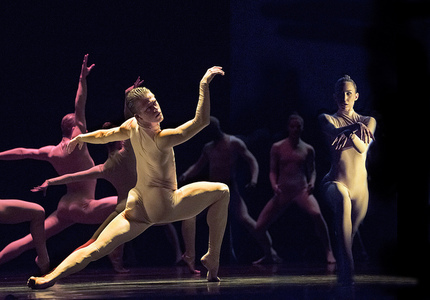 In the last nine years Ballet British Columbia has been reimagined under the vision of artistic director Emily Molnar, to become Canada’s leading contemporary dance company. In that time the company has supported the development of 45 new works from choreographers across the globe.

This programme is slightly unusual in that it includes two pieces originally created for other companies. The joining strand is that each are works from leading female choreographers, placing the tour in a wider celebratory context of 100 years since women received the vote in the UK.

The programme opens with Molnar’s piece, 16+ in a room. The title comes from the underlying concept of what would happen if you put 16 people in a room and started tipping it. The stage itself doesn’t tip, but the lighting, which ranges from overhead spotlights to half-light and haze, changes our focus.

Composer Dirk Haubrich’s electronic music starts with a jolt and doesn’t get any easier on the ear. It is a mixture of white noise, mechanical and military sounds, that if intended to maintain audience focus on the dancers, to me felt distracting. The dancers, in black jeans and sleeveless vests, respond with jolting movements. Intermittently a dancer holds up a sign that reads, ‘This is a beginning,’ or another, ‘This is not the end.’ It’s a metaphor for unpredictability of time and the unknown. However, while the work delivers an overall atmosphere of chaos and uncertainty, it is a challenging introduction to this innovative, contemporary company.

In comparison, the second piece, Solo Echo by Crystal Pite, who made her choreographic debut with Ballet BC in 1990, is far more accessible. Again, the dancers are dressed all in black, this time in looser-fitting suit trousers and waistcoats, exposing their arms and shoulders. This is a more intimate piece, for seven dancers, set to Brahms’ Cello Sonatas. Influenced by Mark Strand’s poem, Lines for Winter, it features a continuous snowscape, that adds further beauty to the gentle fluidity of the partner work. Pite has created an echoing effect in the movement, none more so than when the dancers line-up, and fall one by one into the snow, one turning to help the other up – they are separate but also one.

The final piece, Bill, from Israeli-born choreographer Sharon Eyal, is an explosion of energy guaranteed to send audiences out on a high. It includes additional choreography from Gai Behar, whose work includes producing techno raves, and the influence here is clear. Our focus is taken from a single dancer to the whole company, with skilled choreography that gives the impression of complete freedom of expression, while clearly containing the dancers within a dynamically-patterned format.

All the dancers are dressed in skin-tight, flesh-coloured suits, that take on various colours from the lighting. The costumes and flexibility of the movement, give a superhero feel. At times the dancers look like they could be made of rubber. Ori Lichtik has created an original soundtrack of club music that emphasises the bouncing, squeezing and pulsating movements. At points the group shout out single words, like: ‘Magic’, and ‘Abracadabra.’ It’s not always easy to make out what is being said, but that seems less important than the idea of sensory overload that makes you want to join in, even if just by raising your voice. There is a sense of freedom in this piece that is exhilarating.

For UK dance audiences, Ballet BC is still a relative unknown – having only performed here once before as part of Birmingham’s International Dance Festival last year. Judging by the warm audience reaction at The Lowry, and after this six-venue UK tour, this won’t be the case for long.