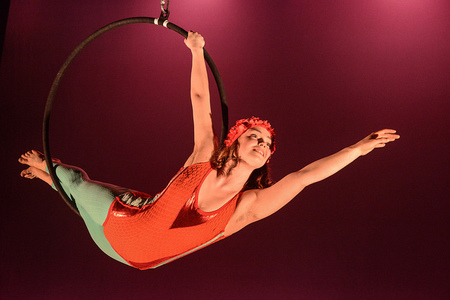 One of the great beauties of circus is its ability to cross boundaries of language, age and, for many of us, what we might imagine is physically possible. In the Little Mermaid, the multi-talented Metta theatre team use their circus skills to push the boundaries of story-telling into what is becoming an exciting new genre, the circus musical.

At the Lowry last year, we saw on the same Quay’s stage Belgrade Theatre Coventry’s magical version of the classic Fellini film, La Strada, nominated in the 2018 MTA awards. Metta use similar integrated story-telling using circus tricks, actor-musicians and song to support and add dimension to its central fairy-tale narrative.

As with all adaptations, there is room for interpretation in the story and Metta’s version is neither as upbeat and cheerful as the Disney animation nor as dark as the original Hans Christian Anderson tale, where the mermaid heroine is dissolved into sea foam.

The strength of this production is the narrative it chooses to tell never loses focus, remaining central to everything around it, even when that something is a woman playing a violin while swinging upside-down on a hoop.

For those new to the story, in its simplest form it tells the tale of a young mermaid who saves a man from a shipwreck and wins his heart. Here circus skills are used to stunning effect to create a world of under-water weightlessness as the cast, dressed in brightly-coloured swim-suits, footless tights and retro-flower swimming-caps, somersault, dive and rotate along the sea-floor on a huge cyr wheel. Juggling in dimmed-light with fluorescent balls becomes dancing glow-worms, and crouching bodies become a living coral-reef.

There is a bit of panto-style gender-bending with the Seawitch being played by a towering male, Josh Frazer, who also gives a Les Ballets Trockadero style performance during the Palace Ball scene. And the metaphorical dizziness of falling-in-love is given physical form in a swinging duet.

It is a sophisticated family show with a genuine wow-factor for little eyes.

The six-year-old critic with me said: ‘I liked the singing and the sea-horse that looked like a trumpet, but I can’t say a favourite bit because I loved it all.’