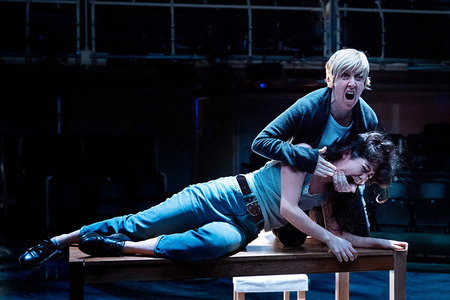 Mental illness, once hidden away, is now being talked of in the public sphere like never before. It therefore feels timely for the Royal Exchange to make it the topic of a new play, but with that comes a heavy weight.

Despite the constant feed of gloom in the press, great strides have and are being made elsewhere to improve the treatment and perception of mental illness. There is still much to be done, of course, and this debut from Kendall Feaver is another welcome step towards widening the debate.

In a previous role, I worked on national guidelines for mental health. On reading the symptoms for a severe mental illness one psychiatrist raised the concern that the list was so general it could be applied to almost anyone, sometimes. At that point, a man who was living with the condition said: ‘Yes, but most people don’t sometimes go looking for Prince Charles’ dog.’

This same insight, complexity and humour is captured in Almighty Sometimes, winner of a Judges Award in the Bruntwood Prize 2015. When we meet Anna (Norah Lopez Holden) she is 18-years-old and has been visiting a psychiatrist (Sharon Duncan-Brewster) for seven years. Although her diagnosis is never stated, we know she has a severe mental illness because she is being treated with a cocktail of drugs, including potent antipsychotics.

The transition from child to adult services is just one of many changes happening in her life. Anna is starting a relationship with Oliver (Mike Noble), considering her future post-school, striving for greater independence from her mum (Julie Hesmondhalgh), and wondering what it would be like to live without medication.

What follows could have easily become a drum-banging exercise either for or against antipsychotic medication. It is a credit to Feaver that she doesn’t come down on one side or reduce the characters to issues. Hers is a multi-layered script and, while it would spoil the impact to start peeling them back here, it loses nothing to say Feaver embraces the complexity and in doing so injects much needed humanity into the subject, allowing the audience to view the situation from a range of perspectives often shifting sympathies as they do so.

The characters feel alive and their relationships relatable. At times, lighting and sound are used to striking effect to reflect the imbalance of electrical impulses in Anna’s brain. Katy Rudd’s understated direction, keeps the focus on the emotion of the piece, making for a powerful, witty and heart-breaking production. There are outstanding performances all-round and Norah Lopez Holden, who won best newcomer at the MTAs last year, is proving once again she is an exciting young talent to watch.

The Almighty Sometimes is at The Royal Exchange, Manchester from 9-24 February 2018.