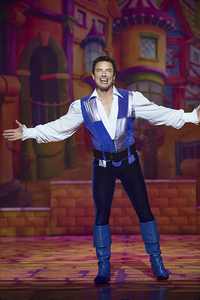 Pantomimes are made for unlikely pairings, but few seem stranger than matching Torchwood star, John Barrowman with comedy duo, The Krankies.

If Qdos Entertainment were to return to Manchester after 10 years with a bang, it didn’t feel like this line-up was it. How wrong could I be?

This is the biggest pantomime the region has seen for many years, in every sense – entertainment, comedy, pace, costumes and spectacular special effects.

Barrowman is an all-round entertainer – he can sing, dance, act, present – and he gives it all in a high-energy, charismatic performance as Dick Whittington, who saves the world from King Rat (Phil Corbitt) and wins the girl (Lauren Hampton). Barrowman, a high-profile gay man, has some fun with this show , camping up the boat scenes singing The Village People’s ‘In the Navy’, and getting the whole audience to join in the actions to ‘YMCA’. At age 50 there is something of the Peter Pan about him, and the costume department play along with his cheeky antics, dressing him in either velour jodhpurs or tight white shorts.

There is a playful innocence about Barrowman’s cheeky innuendo, which is matched perfectly in The Krankies, who’ve been working their act since the late 1960s and are old pros at pantomime. In a twist on the traditional pantomime dame, we get schoolboy Jimmy Krankie – played by a 70-year-old woman. Her real-life husband, Ian, the other half of the Krankies, plays Councillor Krankie.

Like many adults in the audience, I grew up with the Krankies’ TV show and have seen them in panto more than 20-years-ago now. I thought they were fan dabi dosi then, but aside from the nostalgia of seeing them again, I did wonder how the act would work at their time of life. Remarkably it does. Little Jimmy Krankie is still thrown around like a ventriloquist’s dummy, although she does joke at one point: ‘How long do I have to keep doing this?’ Theirs is a silly, physical humour that leaves room for plenty of innuendo to keeps the adults and the kids laughing for different reasons.

Barrowman and the Krankies have been working pantomime together for several years now. They bounce off each other easily and their infectious energy fuels a fast-paced swirl of a fairy tale adventure that involves a flying sleigh, a 3D sea adventure, super-soakers aimed at the audience, fireworks, and little Jimmy Krankie being swallowed by a giant shark.

If Qdos wanted to show Manchester why it is the world’s leading pantomime company – it’s done it with sleigh bells on. For the Opera House this Dick Whittington may very well be the panto paved with gold – it’s terrific!

Dick Whittington is at the Opera House, Manchester from 9 December 2017 to 7 January 2018.