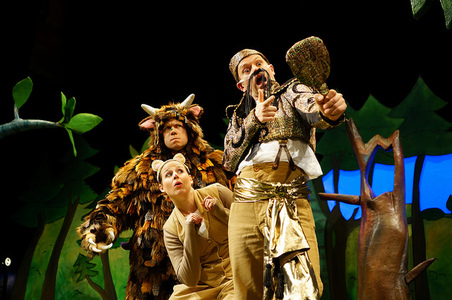 It’s hard to imagine The Gruffalo as a little-known story. Axel Scheffler’s illustrations for Julia Donaldson’s children’s book are instantly recognisable. Even if you haven’t read it, you can’t escape the mythical creature who has since become an animated film star with several spin-offs.

Yet, when Olivia Jacobs and Toby Mitchell of Tall Stories theatre company first approached Julia and Axel about adapting their story for the stage, they were acting not on the hype we now see, but on the sheer delight of a story that has captured the imagination of little ones for almost 20 years.

Knowing how popular the story has become you could sceptically think any live version of The Gruffalo wouldn’t need to work hard to fill a theatre. However, since opening the show in 2001, Tall Stories hasn’t taken anything for granted. This isn’t simply recreating the story on stage, it is a child’s introduction to musical theatre, with the characters brought vividly to life through song.

The heart of the story is still very much the same – a Mouse takes a stroll through the deep dark wood in search of a tasty hazelnut, but instead finds a cunning Fox, a not-so-wise Owl and a slippery Snake. Tension comes as the young Mouse uses her imagination to conjure up a monstrous creature even more frightening than the predators she faces.

To save herself from becoming dinner, the Mouse comes up with the idea of a terrifying creature, the Gruffalo. But as the children in the audience shout back in unison: ‘There’s no such thing as a Gruffalo!’ Or, is there?

There are some lovely moments when Lauren Scott-Berry as Mouse gets all the children involved, inviting them to alternatively fill the auditorium with a loud roar and then to be quiet as a mouse.

Alastair Chisholm plays all three predators with comic panache and just enough menace to be a scary, but not too scary, villain. And when the Gruffalo (Aaron Millard) finally appears in a big colourful, floppy costume, the children are all fully absorbed ready to sing-a-long the catchy, ‘G-G-G-Gruffalo’.

Looking around at the smiling youngsters clapping along I wonder, could there be a more exciting introduction to theatre than this 55-minute adventure of magic, monsters and music?