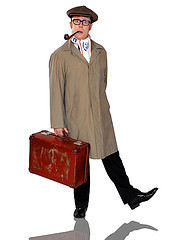 Recreating a national treasure on stage is a tough call for any actor. So much so, that when Bob Golding took on the challenge of a one-man play about Eric Morecambe’s life, his success has meant it is now almost impossible to imagine the show without him.

This time around it’s being billed as an all new production. There is a new director at the helm, and the production values are marginally higher with a few more props. But with Golding centre stage, it feels like the same show. And that’s no bad thing. When it first toured, after its 2009 Edinburgh premiere, it was a near perfect show, which won an Olivier Award for Best Entertainment and a Best Actor nomination for Golding. I saw it twice on that first tour and to go back a third time tells you something of how much I enjoyed it. And as associate producer, Eric Morecambe’s son, Gary, gives his stamp of approval.

The play is a whistle-stop tour of Morecambe’s rise to fame, with his enduring showbiz partnership and friendship with Ernie Wise at the heart of the story. Tim Whitnall has penned an affectionate script, but Golding is the magic that ties it all together.

Aside from the undoubted pressure of portraying a much-loved comedy genius, Golding takes on the roles of some 55 different characters in Morecambe’s life, from the comic’s ambitious mother to a New York cabbie, even throwing in a memorable impression of Bruce Forsyth into the mix. The only character he doesn’t morph into is Ernie Wise, who is portrayed as a wooden puppet with Golding’s voice. If it sounds derogatory, it isn’t, but rather is a constant presence reminding us that there was no Morecambe without Wise.

As Morecambe, Golding is a marvel to watch, not least because it is a performance which requires such sustained energy to make it work. Three years on, there is no question as to why the show’s producers wanted him back for this new tour. He is a ray of sunshine, who makes us fall in love with Eric Morecambe’s silliness all over again.