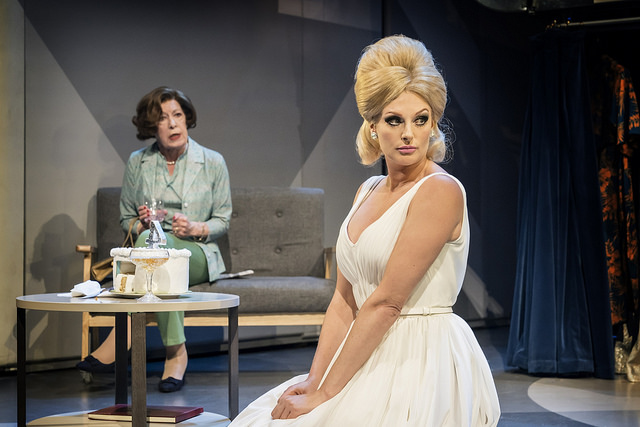 Fifty years after her 1960s heyday, Dusty Springfield remains one of Britain’s best loved and most successful singers, with a place in both the US Rock and Roll and UK Music Halls of Fame.

But while her breathy, soulful voice may be instantly familiar, her life outside of the spotlight is much less known.

This new musical, written by Jonathan Harvey, aims to reverse this; bringing to a popular audience a glimpse of who Dusty was behind what she described herself as “90% smoke and mirrors”.

Not to be confused with the recent, Son of a Preacher Man, a jukebox musical based around Dusty Springfield’s greatest hits, this is a biopic weaved around her music.

It is unfortunate that these nurturing and at times life-saving friendships are often reduced to mere comedy characters. That said, Harvey has his work cut-out creating a musical from such a desolate leading lady. There is plenty of drama, but it is for the most part on the darker side of life as Dusty’s self-pity spirals into alcohol and drug addiction.

The tense relationship with her straight-talking mother, Kay (Roberta Taylor) hints at possible origins of this deep insecurity. But that’s as much as we learn of her early life as Mary O’Brien.

The show opens in a recording studio at the height of her fame. Katherine Kingsley takes no time in warming-up, presenting us immediately with a complex character who behind her thick kohl eyeliner and blonde beehive wig is a mass of insecurities, and so much of a perfectionist she’ll even record in the Ladies’ room to capture the sound just right.

We again see her forthright and determined nature when on tour in South Africa she takes an anti-apartheid stand by refusing to play to segregated audiences – an action which got her deported. But again, rather than celebrate her being ahead of her time, Harvey uses the scene to take a cheap shot at Cliff Richard.

In many ways, like Harvey’s hugely successful Beautiful Thing, this story at its heart is one of secrets and hidden sexuality. And it is this aspect which he handles most sensitively and convincingly. Look of Love is spun as a passionate and seductive duet by Dusty and her lover, Lois (Joanna Francis).

Tom Pye’s cubic set creates an intimate and intense setting, as the backdrop to a passionate and dramatic life. It is a life shaped by music and the live band is pulled into focus for the recording scenes, on a raised platform at the back of the stage. Projections and wheelable props are then used to transform the stage into any number of settings including a backstage dressing room, Memphis city streets and even a palatial Californian home with full-size outdoor pool.

There is also emotional film footage of Dusty’s funeral in 1999, after which Kingsley returns to the stage, radiant to sing, You Don’t Have to Say You Love Me. Her performance has the whole audience on their feet before the end. Her performance is mesmerising.

Like many celebrities her star is supported by numerous hard-working and talented people around her. It is an all-round top-notch cast and Rufus Hound is terrific, as always, in a well-timed, generous and understated performance that holds back to let the star of Dusty shine.

This is Dusty’s life and there is no doubt it is Kingsley’s show.