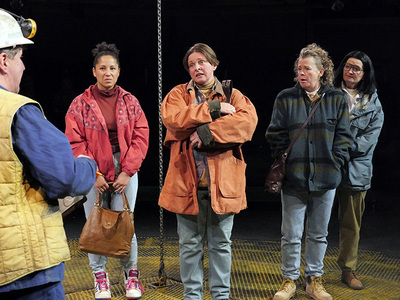 Growing up in a north east mining village I know all too well the part miners’ wives played in supporting the miner’s strike of 1984-85. Their protests were often ones of survival; sitting for hours on the cold city streets, raising awareness of the cause and begging for food for their families.

Fiona Whitelaw’s 2016 play Tinned Goods recently brought some of these stories to the fore, focusing on three generations of women in a mining community, and how the strike not only impacted on them financially and materially, but also on their friendships, families and relationships.

Relationships and the relevance of political decisions to every fabric of life are also at the centre of Maxine Peake’s new play, Queens of the Coal Age.

Set in Lancashire, it’s based on the true story of four women: Anne (Kate Anthony), Dot (Jane Hazlegrove), Lesley (Danielle Henry) and Elaine (Eve Robertson), who occupied Parkside Colliery in Newton-Le-Willows as a 5 day protest for Women Against Pit Closures.

It’s 1993, almost 10 years after the year-long strike of the 1980s. Since then the industry had seen pit closures year-on-year, and as we meet these four friends, Parkside Colliery is next on the list.

John Major is now Prime Minister, although he is never mentioned. Margaret Thatcher is still the enemy figure. As Lesley says, “She’s done for the name Margaret what Hitler did for little moustaches!”

Peake’s script is littered with barbed one-liners, which brings dark humour to an otherwise heavy subject and keeps pace in a largely static and claustrophobic play. For the most part the women are stuck in one dark space and we all know how it’s going to end.

We are told they are ‘ordinary’ women. Yet one is Anne Scargill, wife of Arthur Scargill, president of the National Union of Mineworkers.

Peake does well to humanise the face of what is sometimes seen as a caricatured battle between Scargill and Thatcher. But her characters also brush aside comments about his illegal strike as ignorance, when the National Union of Mineworkers failure to hold a national strike ballot was a dividing factor in mining communities and went against what many miners believed was fair and democratic. Having this raised by a manager, portrayed as a comedy character, tells the audience what the playwright thinks they should think. There are points when it feels close to a political soap box, but Peake resists this by bouncing the dialogue quickly between characters.

Director Bryony Shanahan makes sure we never forget the cause for which the women are fighting, with falling coal dust and ghostly groups of miners wandering through the darkness. We are also left in no doubt of the hardship these women experienced both underground and on the outside. As they stand united in the iron cage bringing them back to the surface, voices of the real protestors play over the speakers. “This policeman said to me, ‘You lost.’ And I said, ‘Yeah, but we went down fighting. And that matters’.”

Queens of the Coal Age is at The Royal Exchange, Manchester from 28 June – 28 July before transferring to the New Vic theatre in Stoke-on-Trent.