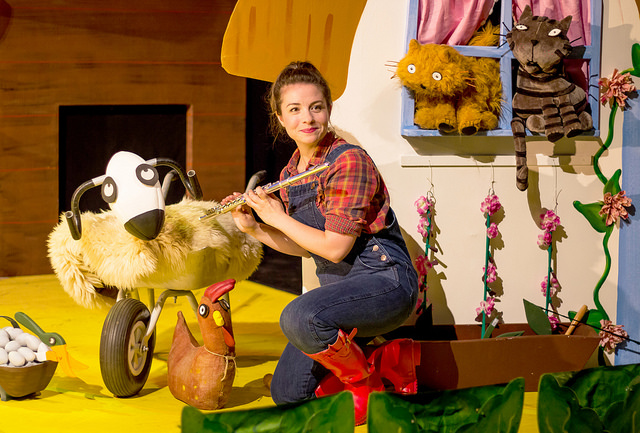 What the Ladybird Heard Live

Ever since the colourful promotional posters went up in The Lowry, my 6-year-old nephew has been itching to see What the Ladybird Heard live.

We’ve been months in the waiting – The Lowry is the final stop on a tour running since January. However, such is the pull of Julia Donaldson’s stories that my little theatre buddy’s enthusiasm hasn’t waned in the slightest.

I did wonder if such anticipation could lead to a let-down. I needn’t have worried. We’ve seen many of Donaldson’s other books staged and this production is by far the best.

There are so many reasons for this. First is the staging, designed in consultation with Lydia Monks, who drew the original illustrations for the book. The bold colours and familiar outlines are striking, creating an instant feel we’re entering the world of a picture book.

A delight of the book is the fun of using your imagination and Monks provides plenty of opportunity for that here too, with inventive use of props creating some brilliant participatory scenes in which many of the farmyard characters are brought to life. An old bicycle, a tin bath and a bit of rope become the handsome horse. A sheep-skin rug, a wheel-barrow, and a rugby ball become the woolly sheep; and a few rough brushes become the dainty dog. Of course, the welcoming, big eyes provide the finishing touch to make these cartoon-like characters spring into life.

Another huge strength is the lively music from JollyGoodTunes, which runs through the whole show, making it in essence, a mini-musical. It’s a mix of recorded and live tunes, with the cast playing a variety of instruments including flute, guitar, violin and penny whistle. It’s wonderfully upbeat and has the audience spontaneously joining in with its catchy rhythm and animal sound lyrics.

The four-strong cast are terrific too. Their performances are polished and energetic. They bounce easily off the audience and the audience in return bounce eagerly back. And what great voices too, particularly Emma Breton (Farmer).

Emma Carroll is beautiful on the flute attracting the little Ladybird, who darts about like a sparky fire-fly on stage. Benedict Hastings’ Lanky Len, with his Daffy Duck voices is a definite crowd-pleaser. In the production we saw, understudy Will Steele stood in as Hefty Hugh. His antics with Lanky Len as the two hapless burglars, who plan to steal the farmer’s prize cow, make for some fantastic comic moments.

It is here that Donaldson’s story comes fully alive on stage –  the directions of the villains’ plan and the Ladybird’s idea to foil it become a comic stalking round the duck pond. We all know what’s going to happen, but Steele and Hastings hook us in all the same.

The 55 minutes whizzes by, then there’s a quick audience participation song before the farmer and friends are away, leaving us all smiling and singing on the way home. For a summer treat you couldn’t hope for a sunnier children’s show.

Kenny Wax Family Entertainment in association with Matthew Gregory’s production of What The Ladybird Heard Live on stage is at The Lowry from 1 – 26 August. Visit website for details.

To find out more watch the trailer below and read our interview with Julia Donaldson.