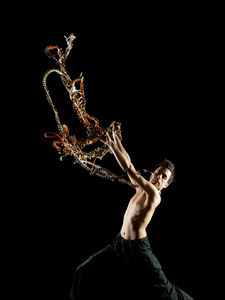 Echoes and I Imagine

For a solo dancer to perform a full-length show is an impressive feat and one which Aakash Odedra pulls off with ease. The last time I saw it done was the phenomenal Akram Khan, who mentored Aakash earlier in his career, and his influence can be clearly seen, particularly in the second of the two pieces, I Imagine.

Both pieces are inspired by South Asian classical dance, with great attention to the overall atmosphere created, through lighting and sound as well as movement. Entrance to the auditorium was restricted to small groups at a time so as not to allow too much of the haze created on the stage to escape.

During the first piece, Echoes, choreographed by Aditi Mangaldas, the atmosphere created by the smoke and lighting is one of a hazy, desert landscape. Here the central focus is bells, used frequently in Kathak dance. There isn’t a clear narrative to the movement, but the shaker bells are used in innovative ways, and the sequence where Aakash wraps chains of them around his ankles and uses his movement and feet-stamping as a form of percussion is exhilarating. Unfortunately the updating of the traditional music by loud amplification spoils the beauty of the overall effect. At times I found it loud to the point of being painful, which is a shame because visually it is otherwise an entertaining and engaging piece.

The second piece, I Imagine, choreographed by Aakash Odedra and spoken word artist Sabrina Mahfouz, gives him more room to express his talent for storytelling. In a mix of dance, mime and spoken word, it looks at migration across generations. Again the design is effective, with a stage of random suitcases which become part of the movement in a series of imaginative ways. Aakash holds the audience’s attention on the journey, using masks and body contortions to become a number of different characters in a clear but by no means linear narrative. It is entertaining, thought-provoking, challenging and beautiful – everything that makes you want to look out for this young British performer to see where his talent takes him next.