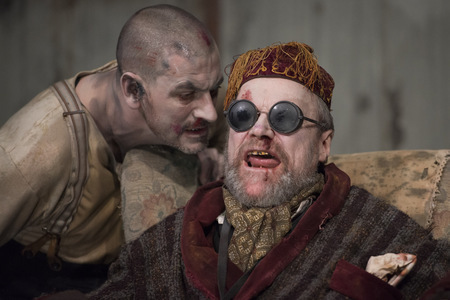 The Corrie factor just brought Beckett a whole new audience. There are many who have questioned what soap fans will make of the play. I think it’s likely they will find it as absurd and unsettling as anyone else. And if you’re searching for some deep meaning, there is none, only a suffocating futility.

Here Coronation Street favourites, David Neilson (Roy Cropper) and Chris Gascoyne (Peter Barlow) play two desperate characters, clinging to each other because they have nothing else. Both actors are almost unrecognisable in the roles. Neilson literally takes centre stage as chair-bound Hamm, who barks orders from his battered armchair. Wearing a velvet-collared dressing gown, matching hat and shades, he tells stories that lift him momentarily above the filth he is living in with a mock superiority.

Hamm is unable to see the squalor he lives in but the audience can see how empty his pretence is. His face is bloody and his small room is no more than a rusty shell that makes you want to wash just looking at it. In comparison, Gascoyne’s character, Clov is all too aware of his surroundings and it’s as if the acceptance of this has worn him down in every sense. His clothes are ill-fitting and dirty; he stands stooped, twitches, wheezes and walks as if being dragged. He looks after Hamm with a resentment that is almost tangible. At one point Clov hits Hamm with a toy dog that he half-made for him (it was the wrong colour and only has three legs) and Hamm responds with, ‘If you’re going to hit me, hit me with an axe.’

The only other two people in their world are Hamm’s parents, Nagg (Peter Kelly) and Nell (Barbara Rafferty), who live in rubbish bins begging for any morsel of pleasure. At one point Clov sees a young boy from the window, but neither he nor Hamm is sure if the boy was real or not.

Death hangs heavy in this play. Often plays about death have something inherently uplifting about them, a response that makes you glad to be alive. This play doesn’t but rather leaves an unsettling angst. There is a line in it, ‘There is nothing funnier than unhappiness,’ but the laughter here is hollow rather than joyous.

Endgame has more misery than a typical Christmas episode of EastEnders and like a soap opera compels us to watch, even when we can’t genuinely say we’ve enjoyed it.