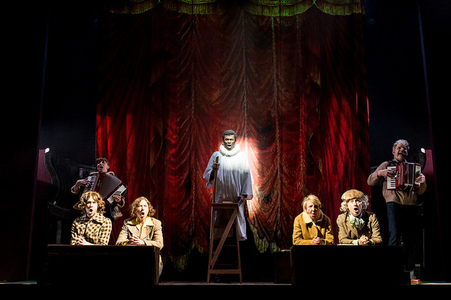 I am Thomas A Brutal Comedy With Songs

I am struggling to think of a time when I’ve felt more disappointed with a play than I do now. On the face of it, I Am Thomas held much promise. It is a co-production from several excellent companies, whose previous work I have enjoyed very much. It is written by Simon Armitage, currently Professor of Poetry at Oxford University and one of our MTA award 2015 best actor nominees, Dominic Marsh is among the cast. It is also a true story of Thomas Aikenhead, the last person to be executed for blasphemy in Britain. Given that people are still killed for blasphemy in parts of the world, you might think that the content could have some relevance today.

The story, what there is of it, is told through song. The second song is Who the F*** is Thomas Aikenhead? It reminds me of that song, Who the F*** is Alice? It’s lowest common denominator stuff, and once you’ve laughed at the lyric the first time, it becomes tiresome. There is little melody to any of the songs and the real tragedy of the show is I came out none the wiser about who Thomas Aikenhead was or what he said that led to his trial and execution.

There is some very pointed ridiculing of religion, and by having each character take their turn at being Thomas there was an assumption that everyone watching held the same views – completely against the premise, that everyone should be entitled to an opinion. It is a shame that what could have been an opportunity to address an important issue like freedom of speech was used for cheap jibes at the Christian faith. And having one guy at the end wearing a Je Suis Thomas T-shirt while a disco ball spun overhead, felt lame.

There is such a mishmash of costumes, characters and styles as to be distracting. To have Thomas in the dock as Dolly the Sheep, it’s not so much a brutal comedy as it bills itself, as a mockery of the short life and death of poor Thomas Aikenhead.

The ensemble cast does as well as any actors could be expected, given the material they are working with. My over-riding feeling from the evening was how can you throw so much good together and get such trite?