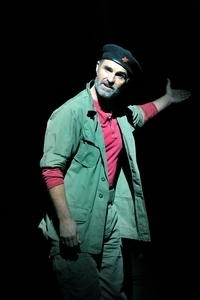 Bill Kenwright’s production of Evita returns to Manchester for the third time in almost as many years. With repeated runs it is easy for shows to look tired and pared back. But remarkably with this production the new tour has upped its game, being tighter and emotionally more powerful than previously.

For those who haven’t seen Evita before, Andrew Lloyd Webber’s dramatic score coupled with Tim Rice’s unique take on a political true story provides a winning combination, that still makes it one of the greatest musicals more than 30 years on. For those who have, this production is definitely worth another look.

The staging is the same as the previous Kenwright productions, a minimal yet effective mix of majestic stone pillars and imposing steel staircases. The 1940s dresses are still delightful and Bill Deamer’s tango-influenced choreography is faster and more seductive than ever. Yet apart from everything being much slicker, the main change is in the casting of Che, with former Wet, Wet, Wet frontman, Marti Pellow taking on the role of rebellious narrator.

Pellow, who has successfully made the move from pop star to musical star, with West End roles in Chicago and Blood Brothers, brings star quality that is not only a winner with the box office, but which adds a necessary strength to the character of Che. He sings it angry, and at times almost shouty, but it works, bringing out the complexity of this seemingly straightforward rags to riches tale, and lifting this tour above the two for its emotional impact.

Of course, the central role of Eva Peron is also crucial for the show’s success and here Madalena Alberto is wonderfully cast. The Portugese singer seduces everyone in her path, the audience included. The story chronicles Eva’s rise from ambitious teen, chasing dreams and men who she believes can lead her towards them, to the glamorous first lady of Argentina, as wife of dictator, Juan Peron.

Eva is manipulative, steely, fun, flirty and fabulous, and Alberto captures her many facets with a voice so powerful that at times it is overwhelming.

Mark Heenehan is a solid choice, to reprise his role as Peron, while Sarah McNicholas provides a vulnerable contrast to Eva as the Mistress, singing Another Suitcase in Another Hall beautifully.