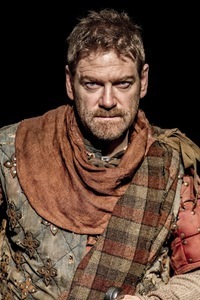 The Manchester International Festival has made its mark by commissioning bold, new pieces of work that often blur the boundaries of different art forms. In this sense its staging of one of Shakespeare’s most popular tragedies, Macbeth appears at first a little out of place. But this is the Scottish play as you have never seen it before.

Yes, the story and the poetry is still there, and there has been no playing about with the setting or characters by placing the events in a different time period. It remains faithful to the text yet brings Shakespeare alive in a real and raw way that is rarely achieved.

The return of Kenneth Branagh to both Shakespeare and the stage has been a huge draw and rightly so, but this is an incredible production on many levels.

The venue itself has become a talking point, a secret to ticket holders and now revealed as St Peter’s Church in Ancoats. It seats about 200 people in raised benches at either side of the nave, with one end built up like the gates to a castle and the other, where the altar would have been, has almost floor to ceiling stained glass windows and is lit with dozens of candles over which hangs a huge cross. The centre is like a huge trough of peat and sand, which soon turns to mud as the site of a bloody, rain-soaked battle. And it seems that even the weather conspired with designer, Christopher Oram, with the recent heatwave making for an even more claustrophobic feel to the action.

The immediacy of being so close to the actors is both thrilling and compelling. We don’t just hear about the battles we witness them close enough to get splattered with mud, we see all the murders as they happen and not just the blood soaked hands of those who carried out the dreadful deeds, and yet surprisingly Branagh manages to move us to sympathy with tears for his hideous dead queen.

There is electrifying stage chemistry between Branagh, who co-directs with Rob Ashford, and Alex Kingston as Lady Macbeth. They play the relationship as a passionate one in every sense.

Branagh’s performance has everything, capturing the poetry of the language, the valour of the warrior, the passion of the lover, the guilt of the murderer and the pain of the fallen.

He is supported by an exceptionally strong cast of 27. There is not a weak link among them so it’s hard to pick out some and not others, but MTA award winner, Ray Fearon is magnificent as the valiant, Macduff, and Daniel Ings brings a memorable freshness to the small, comical role of the porter.

As a reviewer I feel that I have to stay measured, but this is one occasion where I just want to say – wow, wow and wow again.

Congratulations to all involved – after 400 years of Shakespeare you might think nothing that hasn’t already been done could be done, but in MIF’s Macbeth, Branagh has set the bar at a new level.

Macbeth is at St Peter’s Church, Ancoats as part of the Manchester International Festival from 6-20 July 2013.