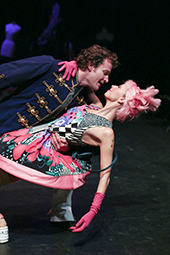 I must say upfront that Opera della Luna is one of my favourite theatre companies, for the sheer energy, fun and joy its productions bring to the stage.

So, the show last night could have gone one of two ways, either I’d be biased and love it anyway, or I’d have high expectations that could be thwarted. As it happened it was a damp, cold evening and after a let-down earlier in the day I felt in need of some cheer. Suffice to say that if you are looking for a show with a lift you don’t need to look much further than this one.

The Mikado is one of Gilbert and Sullivan’s finest comedy operas, but although many of the songs are familiar it is difficult to keep such a well-known and well-trodden piece fresh. Here the company takes the original satire and gives it a modern-day twist with references to mobile phones, reality TV, Twitter and Botox. There is nothing too outrageous in any of this, but the excellent comic timing of Richard Gauntlett as the bumbling Ko-Ko keeps it fast-paced and lively.

The real innovation is in the costumes and design. Inspired by the Versace exhibition in New York they are gaudy, vibrant and demand attention – particularly Katisha’s Japanese temple frock which sends blinding swirls of light around the auditorium with her every move. However, they also have more than a hint of the play-school about them – all Opal Fruit colours in a variety of stripes, checks, patterns and spots. Japan here is not so much exotic as a surreal wonderland, with a couple of puppets thrown into the playful mix.

Tim Walton is a charming Nanki-Poo and Victoria Joyce, a rather statuesque and likable, Yum-Yum, but it is a shame to single out anyone because this is a real company effort. All the cast provide strong voices and enormous amounts of energy which lends for a most enjoyable and at times pantomime-type evening.