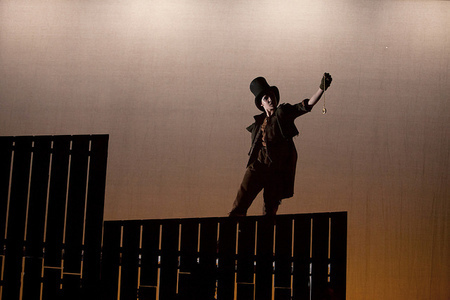 Charles Dicken’s classic tale of a young orphan boy, Oliver Twist continues to be a rich source of inspiration for the creative imagination.

Here the story is told through dance, but as the title suggests, there is a twist.

London-based, Avant Garde Dance is an experimental dance company established by director and choreographer, Tony Adigun in 2001, with the purpose of exploring artistic ideas outside of the mainstream.

In Fagin’s Twist, Adigun mixes art-forms, merging contemporary dance with urban street dance and hip-hop culture. Throw classic literature into the pot and what emerges is a live performance that is accessible to a mainstream audience of all ages, and an exciting introduction to contemporary dance.

Here the story is re-imagined by Maxwell Golden, through the eyes of the villainous youth, the Artful Dodger, who paints himself, Fagin and the murderous Bill Sikes as victims of a not so naïve, Oliver Twist.

Aaron Nuttall, gives us a Dodger with a Manc twang and the unmistakable Liam Gallagher swagger.

Fagin (Joshua James Smith), while towering over the boys in his pick-pocketing gang is played as a young man. We see him grow up, like Oliver, in the confines of a work-house, which he manages to escape with the help of a burly Bill Sikes (Dani Harris-Walters).

Yann Seabra’s wooden and steel framed set is used to full-effect as a climbing frame from which the boys escape, hang and leap. It also revolves to create a wooden wall, with numerous secret entrances and on which we watch the dancing silhouettes of these boys who live in the shadows.

The costumes add to the mix, using the colours and feel of Victorian England and the baggy pants associated with hip-hop culture. Adigun also keeps to the period with the pickpocketing of handkerchiefs, the bright colours and shape of which provide a lively focus for the dancing.

Although altered from its original, the story is easy to follow and is told through the poetic rhythm of hip hop lyrics.

Having Oliver played by a woman, (Jemima Brown), confused some of the children in the audience, but for the performance her much smaller frame and high-pitched voice worked well. Being older, Brown also didn’t embody the vulnerability of a child, which again worked for Dodger’s telling of the story that Oliver wasn’t as innocent as he was painted.

The streets are and have always been a tough place, but the energy of the dance lifts some of the darkness of the story. And it is that raw energy rather than a fairy-tale happy-ending which leaves the audience uplifted.