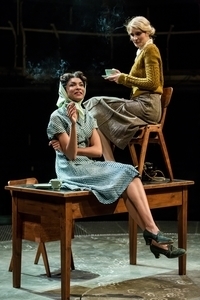 Sarah Waters’ Second World War tale, The Night Watch, has already won critical acclaim – first as a novel in 2006 (being shortlisted for the Man Booker and Orange prizes), and later as a BBC drama.

Hattie Naylor’s stage adaptation, commissioned by the Royal Exchange, keeps the same basic structure of the book, by telling the stories of five intertwined lives using a narrative that unfolds in reverse chronological order. It sounds complicated, but for the audience this story-telling device is far easier to follow that might be assumed.

The action starts in post-war London, 1947, with the characters, dressed androgynously in over-sized grey suits, quietly circling each other. Although Kay (Jodie McNee) is one of the first characters we meet, she appears on the periphery of the story, wandering the streets unable to shift the melancholy of the scars the war has left her with.

In a series of overlapping scenes we meet the painfully insular, Duncan, whose friend Robert shows concern for both his welfare and that of his unmarried sister, Viv. Viv works in a dating agency with Helen, who shares a house with her friend, Julia, who unknown to Viv is also Helen’s lover.

In many ways these are ordinary, complicated lives and it is their humanity, secrets, desires and fears that drives the drama. The bomb-blasts, the sirens and the uncertainty of war only serve to heighten the emotions that are already there. And these emotions run high, culminating in two lust-fuelled scenes, which while not gratuitous, could be considered risqué for a theatre audience.

What works easily on the page or screen can seem intensely intrusive in the intimate space of a theatre, especially the in-the-round space of the Exchange. That these scenes work is huge credit to all involved; particularly Kelly Hotten, whose awkward body-language captures the nervousness of Helen, without making her overly neurotic, and Lucy Briggs-Owen, who sizzles with sexual confidence as Julia.

Georgina Lowe’s double revolve set serves as a metaphor for the movement of time, as the narrative rewinds to 1944 and then further still to the early bomb blasts of 1941. Dan Jones’ sound design, with air raid sirens, bomb blasts and Glenn Miller swing, leaves us in no doubt where we are in time. What drives our interest is not what happens to our characters, but what has happened to them to make them who they have now become.

It’s difficult to explain without spoiling the story, but the emotional intensity builds as Kay’s character begins to move to the centre of the story, and director Rebecca Gatward brings her literally to the centre of the stage, for what is the triumphant scene of the evening. From a character who displayed few likeable characteristics at the outset, Jodie McNee’s raw emotion can’t fail to move, in a moment that even within an almost bare stage evokes a real sense of London in the blitz.

In many ways, The Night Watch is not the World War II story we’re used to hearing. The characters themselves allude to it when Helen says to her lesbian lover, ‘I wish we could get married’. The liberation from war wasn’t a liberation for many women. Much has changed in the 70 years since the war, but the emotions that drive us are the same. And it remains true, that only by gradually getting to know someone’s past can we understand who they are now.