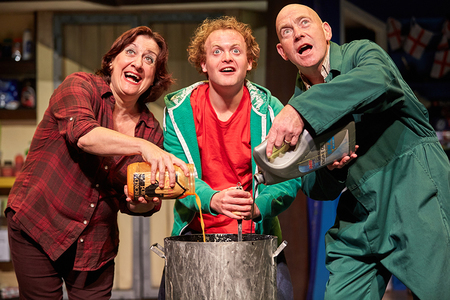 This year marks 100 years since the birth of the much-loved children’s author and as part of the centenary celebrations, Birmingham Stage Company, which has produced more Roald Dahl stories than any other company in the world, is touring David Wood’s interactive stage adaptation of George’s Marvellous Medicine.

The story is a simple if fantastical one, which Wood has updated with modern-day references such as Nintendo Wii and Breakfast TV. George (Ed Thorpe) is on half-term from school. All he wants to do is rest and read his book about a wizard boy, but unfortunately for George his parents have other plans. Living on a farm there are cows to be milked, chickens to be fed, as well as bedrooms to be cleaned.

As if his fun wasn’t being spoiled enough, grandma arrives. George fantasises about having a wonderful grandma who gives him compliments, presents and plays computer games. Sadly, he has a grouchy grandma, who downs her gin in one and has him running after her every whim at the ring of a bell.

To cure his grandma of her terrifying temper, George decides to swap her medicine with one of his own making, with the audience egging him on to add more and more outrageous ingredients. This is one part where as an adult I did find myself thinking it’s maybe not such a good idea to have children playing with a mix of anti-freeze, diesel oil, bleach and hairspray – but there is a warning disclaimer at the end reminding youngsters not to try this at home.

Hopefully none of the youngsters will have a granny like this one of George’s. If she bears more than a passing resemblance to his mother this is because in real life the actresses playing the parts, Tessa and Deborah Vale, are twins. It shows how good the make-up is that they pass realistically as mum and daughter, but pity the casting director who had to make the choice which was which.

Jacqueline Trousdale’s design of a house with the front taken off works brilliantly, particularly for the scenes where granny grows and grows until she bursts through the roof.

From the start George talks to the children in the audience, making them his friends. Things liven up considerably when he starts to involve them in remembering his medicine mix and warming their hands to heat the pot.

And while George and his dad (Richard Mullins) may struggle to recreate the original concoction, their adventure has all the right ingredients for a fun-filled, family show.

George’s Marvellous Medicine is at The Opera House, Manchester from 15-19 November 2016.

Written by Carmel Thomason
Add comment
Who Cares?
FacebookTwitterPinterestWhatsApp
Things I Know To Be True