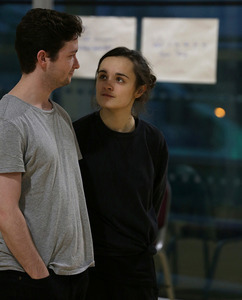 No-one knows the true number of children and young people under the age of 18, who have responsibilities for looking after a parent or sibling. Official UK figures put the number somewhere around 160,000 but if it’s true, as some think, that the reality is nearer 700,000 then this a hidden problem that desperately needs attention.

By producing this play, Who Cares? Lung theatre is giving a voice to this vulnerable group whose stories are often unheard in society. And once heard, these true stories are ones you can’t easily forget.

The script is cleverly crafted from more than 75 hours of interviews with young carers, the relatives they care for, social workers, council workers and other people in authority whose job it is to identify children in this situation and to offer support.

As verbatim theatre the piece is structured around a series of monologues – which must be a considerable challenge for the actors who don’t have the usual safety net of bouncing off each other’s lines.

To get around what could have easily become a series of static talking heads, designer, George Leigh has created a revolving metal set that captures the playfulness and energy of youth as the actors nimbly climb up and down through scenes, as well as giving a sense of being trapped and isolated. It also gives space to the characters – who can perch on different levels depending on whose story is in the spotlight at any one time.

The story gives an insight into the lives of three young carers from Salford. Connor (George Caple) whose mum struggles to cope with depression and bipolar; Nicole (Hannah Bristow) who has been a carer since the age of four when her mother had a stroke outside her playgroup; and Jade (Erin Doherty) whose father was paralysed in a motorbike accident.

Being verbatim accounts from the youngsters the play doesn’t shy away from the harsh realities of their lives. The everyday challenges they face aren’t glossed over, but neither are they exaggerated.

In many ways, it is this truth that makes it so heart-breaking to watch. All three actors do a terrific job and they graciously step aside at the end to allow the real stars of the show to take a bow – the young people on whose lives this play is  based.

I can’t imagine there was a dry eye in the house. What an achievement all round. These are authentic stories that not only deserve to be heard, they need people to listen.