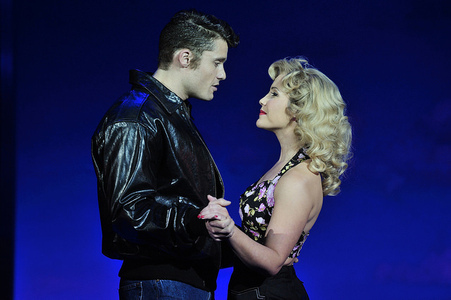 Happy Days may be billed as a new musical, but there’s no disguising it’s the chance of a trip down memory lane that’s bringing in the crowds. Nostalgia is the name of the game, and it scores here on two levels – first for those who remember the TV series, which aired for 10 years between the mid-70s and mid-80s, and for those who remember 1950’s teen culture.

For a musical based on a TV series, Happy Days has good credentials. Original creator, Garry Marshall has penned the book, and Henry Winkler, aka The Fonz was a creative consultant on the show.

Tom Roger’s bold and colourful set design puts the music theme centre stage. The real let down is that, despite bringing in Oscar, Grammy and Golden Globe award-winning songwriter, Paul Williams, to create 21 new songs, none of the tunes match up to the original theme tune. That said, the show doesn’t promise anything that it doesn’t deliver, and the energy with which the cast does so is admirable.

Happy Days is a saccharine world of candy colours and blue skies. The main worry facing the community is that its popular diner, Arnold’s may close. There are cartoon villains in the form of the Malachi brothers, but dressed like Power Rangers, they are obvious to all and a menace mainly to themselves.

Although some of the gags are near the knuckle at times, it’s a gentle world of innocence and change, with some nods to the future adding relevance for a modern audience.

Former Emmerdale heart-throb, Ben Freeman, takes on the iconic role of The Fonz. His voice is a little nasal for my liking, but as we learn, even the Fonz can’t have it all, and Freeman certainly has the necessary element of cool to pull it off. His natural confidence is matched by Sugababes’ Heidi Range as Pinky.

There are other strong performances, particularly from Cheryl Baker, who brings a tangible warmth to the role of Mrs Cunningham as well as adding another dimension to the nostalgia fest, winning the biggest laughs for references to her Bucks Fizz days. And Scott Waugh, who is making his professional debut, gives a promising performance as Richie Cunningham.

In all, it’s two hours of escapism, with oodles of energy and its fair share of laughs, that will leave you singing the theme tune, if nothing else.