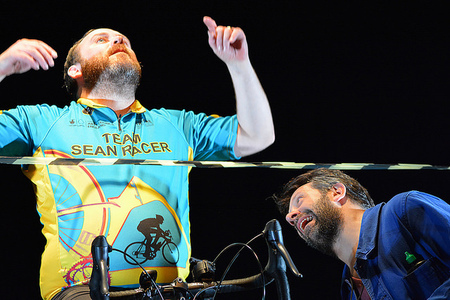 As Leeds prepares for the grand start of the Tour de France in a couple of weeks, Lawrence Batley Theatre, Huddersfield pays a tribute, of sorts, to the great sporting event.

I say, ‘of sorts’, because while there is a definite reverence for the sport and of the endurance needed to complete the race, this comedy-drama is far from a straightforward sporting hero tale.

Indeed, the Lost Boy Racer of the title is not even a shadow in flabby, Sean Racer. Now in his mid-40s, Sean (a likeable Thomas Aldersley) is disinterested in anything but devouring fish and chips. The only notion we have of his cycling past comes from his enduring friendship with bike mechanic Claude and later some dream sequences with a hoody on a BMX bike.

Claude is a cycling bore who works out equations to determine what he can eat so that his energy input matches his output expended on the bike. He acts out commentaries of imaginary races and, although well-acted by MTA nominee Robin Simpson, Claude’s obsession with all things cycling will probably test the patience of much of the audience.

Thankfully much light relief comes in the form of hairdresser Linda-Marie (a fabulously funny, Sarah Groarke), who, in her attempts to distract tax inspector Sean from her dodgy dealings, re-ignites his long forgotten dream to compete in the Tour de France.

Everyone in the audience will relate to Claude and Sean as they recall that exhilarating moment as a child when you realise you’re riding alone, without stabilisers or a parent’s steady hand. For the real cycling enthusiast, there is a lot of detail about the trials and tribulations of racing that, to be honest, for the most part, passed me by. Of course, those with a modicum of cycling knowledge will also know that Sean is unlikely to realise his dream. But imagination is everything, and, come July, when Yorkshire races with a passion, the thrills of the Tour de France will no doubt become all the more real.