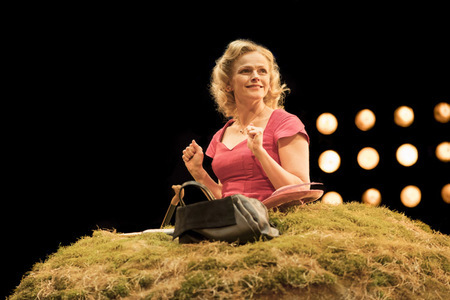 Making Maxine Peake an Associate Artist of the Royal Exchange has enabled a growing creative partnership with Artistic Director, Sarah Frankcom, in which both actor and director are given freedom to explore the boundaries of their disciplines.

After ten or so plays together – including an intense Blanche DuBois in A Streetcar Named Desire, a shape-shifter in The Skriker and a gender-fluid, Hamlet – familiarity could make for a comfortable relationship. Yet, the pairing is a sure audience winner because their work never sits in a comfortable space.

Happy Days in this way is no different. Indeed, there can’t be many plays that present more restrictions for both actor and director of a theatre in the round.

Like all Beckett plays, it is not so much a story as a metaphorical contemplation on existence, with the focus on the fullness of the character, their actions and intonations more so than what it is they say. Here, influenced by the environmental emergency caused by plastic pollution, Frankcom expands the metaphor beyond the human condition, to present a stark picture of the planet’s suffocation.

We meet Winnie (Peake), waist-deep atop a grassy knoll that has seen better days – more mud than grass and most of what grass remains has been scorched by the sun.

Behind her, at the foot of her mound, Willie (David Crellin), her husband, has a hole of his own to crawl into. Although he can safely enter only one way, of which Winnie frequently reminds him, he is less restricted, relaxed and outstretched, half-dressed, reading a newspaper.

Winnie chats incessantly, with barely any recognition from Willie beyond the odd grunt or a raised finger. Yet despite her isolation and immobility, Winnie remains stoically chipper, repeatedly declaring, ‘This is going to be a happy day’.

She is the archetypal keeping-up appearances housewife, even sounding like a younger, Hyacinth Bucket (Bouquet). Her day is brought to an abrupt start by a fire-alarm shrill and blinding spotlights. Seemingly ignoring this daily assault on the senses, Winnie is beautifully dressed in a pink linen dress and matching hat, focusing on what she can, peering in her glass to make minute adjustments to how the spectacles sit on her face. Even reading the writing on her toothbrush and discovering a new word, brings a sense of joy.

As she takes items from her bag, some are discarded, without care, to fall among a pile of rotting rubbish. It’s all very mundane until we realise that sitting among her lipsticks and comb is a gun.

Designer, Naomi Dawson has created the knoll as a small island on a slow revolve, surrounded by discoloured water and washed-up plastics. Peake’s precision in both her movement and clipped speech, captures the audience and keeps them focused for the full two hours she is on stage. This is no small task, as during the second act her movement is restrained further with the character now buried up to her neck.

In this second act Peake’s face is projected on screens above her head. While this allows the audience to see her expressions at all times during the revolve, it is also a further restriction for her performance, requiring her to focus on the lens below for the whole act. Meanwhile, the gun sits beside her head – a constant threat, like climate change, largely ignored.

Peake deftly pulls the dark humour from her lines and paints clear pictures of those she sees with swift accent changes. We feel her Winnie still has energy and dynamism of spirit, even though the days stretch out ahead with the same routines.

Peake is much younger than Beckett envisioned Winnie. But, in many ways, this expands the metaphor to make her character relatable in a whole multitude of situations in which people are physically, mentally or emotionally trapped.

Like Winnie, when faced with a role that could so easily be stifling, Peake and Frankcom have once again excelled.