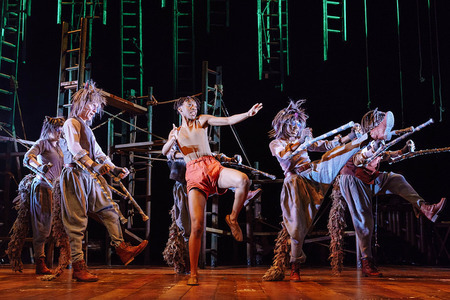 Rudyard Kipling’s collection of short stories, ‘The Jungle Book’ has been enchanting children for more than 100 years.

Today most people know his famous characters, Mowgli, Baloo and Shere Khan, from the Disney adaptations – a cartoon musical in 1967 and more recently an astonishingly realistic, computer graphic version in 2016.

To produce a stage version to meet the expectations set by the big screen is a mountainous task. Yet, with a strong story to tell you can’t underestimate the power of a live performance to captivate young minds. Focused on the stage – a mass of hanging ladders and ropes to create a dense jungle canopy – it’s like they’ve all been hypnotized by python, Kaa.

To create the show, writer, Jessica Swale has gone back to the original 1894 book and used two stories from which to weave her narrative. The strength of the stories comes from their rich box of characters,and Swale keeps them recognizable while stretching some aspects for a 21st century audience.

Shere Khan the Tiger (Lloyd Gorman) makes for a greasy villain, dressed in a leather biker suit, slashed with orange flecks and matching streak through his hair. Deborah Oyelade delivers a sassy, Black Panther keeping perfect poise in a black velvet jump suit. Rachel Dawson gives a comical turn as Kaa, grumbling about ageing as she sheds her skin. While joker Baloo, here a playful Welshman (Dyfrig Morris) is as loveable as ever, with ‘a heart as big as the sun’.

Perhaps the biggest change is giving the part of Mowgli to a woman, Keziah Joseph, whose slight frame, delicate features and pure tone of voice make her believable as a child.

Swale has refocused the story to celebrate diversity. The story, with all the different animals living in harmony, presents a fantastic opportunity for this. For the most part this works well, but it feels occasionally that the issue has been allowed to overtake the story, becoming overly-wordy and preachy, in a jumble of references to gender, sexuality, race and disability.

If this sounds a little too serious for families hoping for a bit of Bare Necessities uplift, Joe Stilgoe’s sunny tunes help keep it upbeat. In many ways this is a play with music rather than a musical, but the live music, embracing a rich mix of styles from across the globe, is a central strength of the show.

The tunes carry along what is essentially a joyful story of family, friendship and oneness under the same sun – and that’s a beat everyone can dance to.