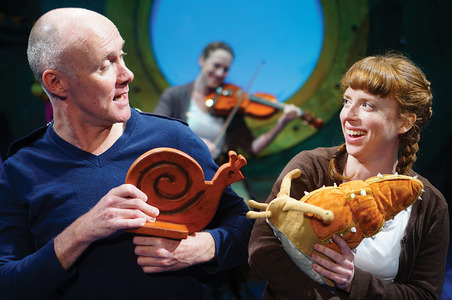 The Snail and the Whale

It feels a natural progression these days for popular children’s books to make their way to the stage, especially when the author is Julia Donaldson.

Tall Stories, whose previous productions at the Lowry include Donaldson’s The Gruffalo and Room on the Broom, are masters at it.

In all adaptations there’s a magical element of childhood imagination, but it is quite a challenge for any company to present an animated tale of a friendship between a giant whale and the tiny snail, who saves his life.

To get around this, Tall Stories tell the story through the eyes of a Royal Navy father (Tim Hibberd), who doubles as the whale, and his adventurous daughter (Hannah Miller), who is also the snail. Inspired by the work of Storybook Soldiers, who help British military personnel serving abroad to record bedtime story CDs for their children back home, Tall Stories have created a multi-layered narrative that sees the daughter as a grown-up (viola player, Rachel Benson) looking back at the fun times spent with her dad, building dens and creating great whales out of pieces of furniture.

It’s also a helluva ride. Hibberd and Miller get the audience involved from the very start, moving through the stalls, playing a panto-style hide-and-seek that causes shrieks of ‘She’s behind you’.

The original story remains central, with its ninja crabs, gawking penguins, hero fire-fighters and a super-soaker splattering across the auditorium as the beached whale gets saved.

There’s plenty of audience participation, with sing-a-longs and even an entertaining maths lesson.

As the dad says: ‘A good story can take you all around the world, without even leaving your room.’ By the end of the hour we’ve ridden an enormous wave of story-telling and are hungry for more tales, more adventure, more fun and more precious time with our little ones before they grow-up.