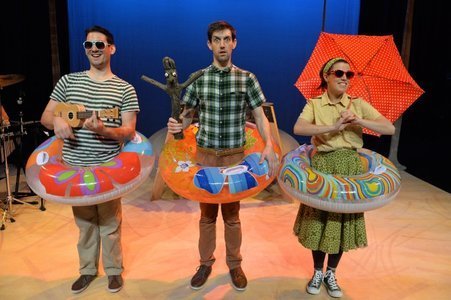 Have you seen the Stick Man? I must be the only person in the theatre who hadn’t, which is why I massively under-estimated this character’s popularity when the show first visited the Lowry a year or so ago. As I was to learn from my nephew – his coming to town is big news. After all, he’s not just a stick, he’s a Stick Man.

It seems, I’m not the only one to have got it wrong. This mix-up is the basis of Julia Donaldson’s delightful story about a Stick Man who gets separated from his family tree after being mistaken for all those things we humans use sticks for – a toy for dogs, hitting a ball, throwing in the river, and a flag pole, to name but a few.

Now a popular animated film as well as an illustrated children’s book, the story of the Stick Man is a familiar one for children. Scamp Theatre build on the audience’s recognition of the characters to get them involved from the start.

It’s hard to compete, scenery-wise with an animated film. Happily, this production doesn’t attempt to; using simple staging which gives the audience plenty of opportunity to stretch their imagination. The characters are brought to life through a mix of acting and puppetry – the actors, giving voice, emotion and movement to the Stick family and the Swan, which tries to use Stick Man to build part of her nest.

Live music on stage adds to the vibrant atmosphere and there is plenty of opportunity for audience participation in the search. At one point the Stick Man runs through the audience followed by a dog, who stops to ask youngsters where he can find him. At once there are shouts, screams and pointing. The scene with the Swan provides another lively, he’s-behind-you moment and the beach scene sees a beach ball bouncing around overhead.

This is a story for every season, ending in winter and the children shouting at the top of their lungs to wake Stick Man from his frozen sleep. There’s even more excitement when Santa Claus and Rudolph arrive for a magical sleigh-ride.

Perhaps because the youngsters in the audience have invested so much emotion and energy in the adventure, Stick Man reuniting with his family tree is remarkably touching. It’s a heart-warming story, and Scamp Theatre add their inventive magic to bring the characters to life in an absorbing way, that makes you feel a vital part of their tale.