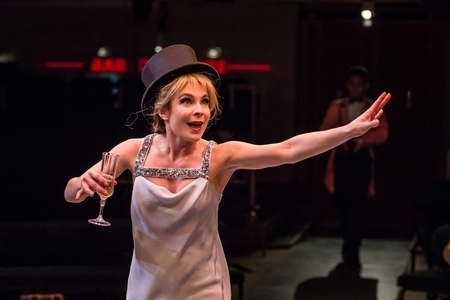 The Royal Exchange likes to put a twist on the usual Christmas cheer with its festive production.

So it is with its choice for this year, Sweet Charity, a musical whose innocent title belies a seedy world of lap dancing clubs, domestic violence and a heartless New York public who would sooner gawp at a drowning girl than give her a helping hand up.

Thankfully our heroine, Charity Hope Valentine, doesn’t see life this way. True to her name, her optimistic buoyancy doesn’t just keep her afloat; it does so with a smile on her face and a song.

As a musical it has good credentials – a Broadway hit turned into a successful film with Shirley MacLaine. The music, here with a live band sectioned in a sound-box to the side of the stalls, takes us from one memorable anthem to another, with huge numbers such as Big Spender, Rhythm of Life and If My Friends Could See Me Now.

Although first staged in 1966, both the music and Neil Simon’s comedic book have aged well. Quips such as: ‘Who dances? We defend ourselves to music,’ still raise the roof when dryly delivered by Holly Dale Spencer as Nickie and has the audience erupt into spontaneous applause.

Derek Bond’s vibrant production is one that bursts with life. He uses the Exchange’s intimate space to full effect, filling the stage so full with performers at times that they are almost on the audience’s laps. Aletta Collins’s choreography gives more than a nod to the razzle dazzle of Bob Fosse’s original dance moves. It’s glitzy and Broadway, yet at the same time is ballsy and full of humour.

It takes a strong lead to shine and hold the audience’s attention with so much going on. If ever there was a role that requires that elusive star quality it is Charity Hope Valentine, and here Kaisa Hammarlund proves she has it in bucket-loads. She’s sparky, cheeky and full of life. Never once is she out-shone, even as she stands lop-sided on one shoe, with mascara running down her cheeks.

This year’s production is brought to us by the same team behind the multi-MTA nominated Little Shop of Horrors (another unusual choice of Christmas show in 2014). Again James Perkins’s inventive design adds a wow-factor that lifts the whole energy of the show. As dance hall mirrors fall from the ceiling it feels like the roof of the Exchange has become the metaphorical magician’s hat.

In many ways it’s a triumph all round. But I’d liked to have seen a bit more fizz at the end, because after such vitality, the conclusion comes a tad abruptly and I was left feeling a little bruised rather than uplifted. It’s not that at Christmas time we always need a happy ending, but like in the film we do need to feel that our girl will live hopefully if not happily ever after.