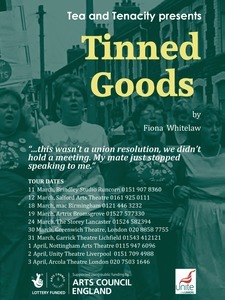 Having grown up in a pit village during the miners’ strike of 1984 I can relate to the story of Tinned Goods in an immediate way that brings to the surface many memories of my own. But you don’t need any connection to mining for the troubles of these characters to resonate in a way that raises questions about the relationship between politics and community.

Tinned goods tells the stories of three generations of women in a mining community, and how the strike not only impacted on them financially and materially, but also on their friendships, families and relationships.  If you have ever questioned the relevance of politics to your life, you need look no further than these women.

The story starts three months into the strike and centres on the fractured friendship between Rachel (Caroline Frewin) and Sue (Fiona Whitelaw, who also wrote the play). Sue’s husband is one of the striking miners while Rachel’s husband has chosen to cross the picket line. He is – to use that emotive word – a scab. And while that means Rachel can continue to buy fresh food in the supermarket, as opposed to the tinned goods hand-outs Sue’s family relies on, she is an outcast to her friends. There is a lot of ‘them and us’, but through the lives of these women we begin to see some of the complexity behind frequently held black and white views.

The story is simply but cleverly staged, with a strong ensemble cast of five each playing a variety of characters. There is a sense of noise, jostling and violence of the picket line and the audience doubles for the crowd as women, whose daily routine was to cook and clean in the home, stand to address crowds at rallies they have organised. Songs between scenes give a sense of unity, both to the structure of the play and to the characters’ plight.

The miners’ strike is a heavy subject which we know doesn’t end well, but in focusing on the women’s stories, Whitelaw brings a new perspective that is both politicising and uplifting. There are echoes to the war years, where women took on roles they otherwise would never have had the opportunity to do. Within the struggle there is empowerment and these women’s voices still have something to say to us today. Finding a common purpose, whatever that may be, helps people to grow and cements relationships in a way that will never be forgotten.

Tinned Goods was at Salford Arts Theatre on 12 March 2016.