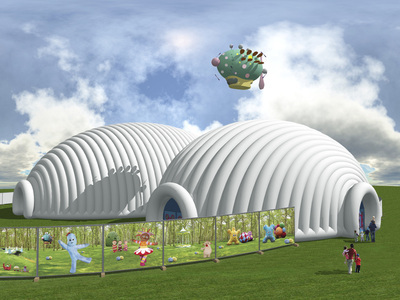 In the Night Garden Live

If ever you need reminding of the joy of live entertainment, take a child to see In the Night Garden Live, the staged version of the CBeebies children’s TV show. As a first experience of theatre for little ones, it is a wonderful introduction. And even if you don’t know your Ninky Nonk from your Pinky Ponk, you can be sure that any two-year-old will.

I took my two-year-old nephew to guide me through the surreal and wonderful world of Igglepiggle. It was an adventure from the start because the show is not in a conventional theatre space, but has its own huge, inflatable venue, which they call the Showdome. The venue is purpose built so that it can accommodate buggies, baby changing areas, and the children aren’t going to hurt themselves if they run into a wall with excitement – although that last bit isn’t in the blurb.

Having a theatre full of toddlers could be chaotic, but for each show the numbers are kept relatively small (there are only 13 rows of seats), it’s very well managed and the staff are smiley and helpful, despite this being the fourth and final show of the day at 4pm.

Once inside, the seating is either standard or premier, which is the first three rows. Within each section the seating is unreserved, but the stage opens out into a huge semi-circle, so that wherever you sit, you’re going to be able to see.

The lights dim and my nephew is fascinated by the overhead projections of colourful flowers and birds which fill one-side of the Showdome, but at two he already knows who he’s come to see. “I want to see Igglepiggle,” he says. Then a man-size Igglepiggle comes on stage and his eyes widen. From now on he’s entranced, and judging by the faces of the other children, they are too.

The stage version closely follows the format of the BAFTA-award winning children’s TV show, in that each of the characters sing their song and it ends with a bed-time story.

We see the Ninky Nonk show, in which Igglepiggle loses his blanket, and finds it again with the help of his friends –  Upsy Daisy, Makka Pakka, the Pontipines, and the Tombliboos, who each arrive on stage to squeals of excitement and waving. While the story is kept reassuringly simple, there is plenty to keep their attention. Igglepiggle and co. appear as small puppets as well as costume characters, which provides a variation of perspective and doesn’t seem to confuse the children at all. The bridge lights up, there are huge bubbles for the face-washing scene, Igglepiggle and Upsy Daisy get a ride on the Ninky Nonk, and there are even appearances from the Pinky Ponk, and the Haahoos.

It’s a fantastical world of colour, music and familiar characters that magically keeps the tots’ attention for an hour. As a first experience of theatre, I can’t think of a better one.

In the Night Garden Live is at the Showdome, The Trafford Centre, Manchester from 2 to 23 August 2014.