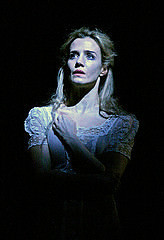 Not I, Footfalls and Rockaby

If you ever question why Samuel Beckett is one of the greatest dramatists of the twentieth century, seeing Not I, Footfalls and Rockaby, may help quell any doubt.

These are three very short plays which, when run together as in this production from the Royal Court theatre, last no more than an hour. They were written during the last 20 years of Beckett’s life and performed originally during the 1970s by Billie Whitelaw, with whom he worked closely. Here Lisa Dwan takes on the challenging roles which see her appear first as a disembodied mouth, floating eight feet above the stage, then a haunted, ghostly figure who paces the floor waiting for her mother to die, and finally, a lonely woman, whose life is fading from her.

All three plays are performed in complete darkness. That in itself is an experience, because even when you know you’re sat safely in an auditorium, there’s something unnerving about being plunged into darkness so black that you don’t know where your own body starts and ends without feeling for it. The effect is disorientating, and doesn’t become any less so when bright red lips appear and words start tumbling out at such breakneck speed that it’s hard to make sense of anything being said.

Although Billie Whitelaw herself has not performed any of Beckett’s plays since his death in 1989, she has tutored Dwan through the roles, and there is a feeling that this is how Beckett meant them to be staged. It is an unforgettable performance of incredible intensity that captures a range of emotions through tone and depth, rather than through the words themselves.

Odd phrases carry a weight that demands attention, like in Footfalls, where the mother says, ‘There is no sleep so deep I would not hear you there.’ But, in the main, there is not much meaning to be found in any of the dialogue.

If ever proof were needed that language often forms only a small part of our communication, here it is. And, while on leaving the theatre I couldn’t tell you much of what was said, the memory of the experience will no doubt linger for a lifetime.

The Royal Court’s production of Samuel Beckett’s Not I, Footfalls and Rockaby is at The Lowry from 23-27 September 2014.