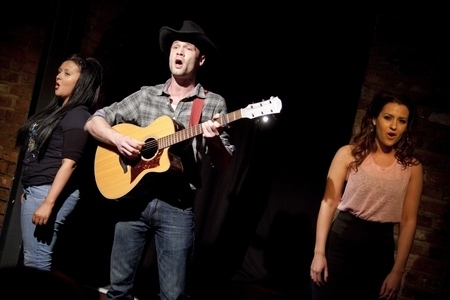 JB Shorts was initially staged in 2009 as a one-off event of six bite-sized 15 minute new plays by established writers, who work mainly in TV.

Now in its 11th season, the format is as fresh and popular as ever, and the team has remained faithful to its home in the basement of Joshua Brooks pub, from where it gets the JB in its name. It has also kept the fantastic value of £6, and at £1 a show, who can complain?

It’s a mixed bag of topics, as always, of which some will appeal more than others. The opening play, by Dave Simpson, ‘Whose Dog is it Anyway?’ puts the spotlight on a separated couple who have fought over custody of the dog. As an idea there is a lot to run with, and Simpson gets the biggest laughs of the night – no mean feat when comic Justin Moorhouse is another writer on the bill, joining the JB shorts team for the first time with Leaky Bacon, an intriguing title for an intergenerational piece about how we all get squeezed in life. However, in experimenting, Simpson takes his humour way too far on a couple of occasions, which quickly turns the situation on its head, making it more sick than funny.

From there we go to Mark Illis’ teacher with psychopathic fantasies of gunning down his students, and one in particular. Again it’s amusing and the kind of sketch that JB Shorts audiences have come to expect.

However, three of the plays this time are well crafted stories that have raised the bar for this format even higher. I See Dead People by Sarah Bagshaw about a celebrity psychic, gives the audience plenty of twists and turns; the incredibly talented Lindsay Williams brings us The Ballad of Valentino Rivas, which cleverly mixes song, an exotic location, dreamers and gangsters. The evening ends on a real high with Peter Kerry and James Quinn’s World War I spoof, A Great War, which is directed by Chris Honer, former artistic director of the Library Theatre. Set in the studios of Britannia Steam News, it is intelligent, funny, and poignant, with excellent performances all round.

In all, it’s a hugely entertaining night out.