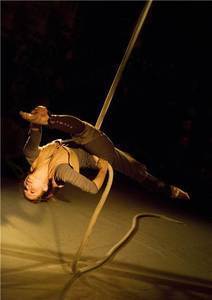 The idea of interpreting Coleridge’s famous poem, ‘The Rime of the Ancient Mariner’ as a contemporary circus performance, sounds as bizarre as it does ambitious. Square Peg’s award-winning production is both.

The company of seven performers (three men and four women), tell the poem’s dramatic tale using a mixture of music, song, acrobatics and contemporary dance. The action is interspersed with a spattering of Coleridge’s traditional lines, but this is definitely a re-interpretation rather than a recital or a retelling. The focus is on the dramatic intensity of the narrative, which is emphasised all the more for being condensed into an energetic one hour performance.

The bare floorboards of the stage become the ship’s deck, on which, stands a scaffold arch and two poles. Although relatively bare, it’s an effective scene-setter and a fantastic playground for the performers who run up and down them with ease, releasing the sails and swinging from the rigging.

The inter-weaving of circus skills throughout, brings an added intensity to the piece, and alongside the dance and sound of the waves, gives a real impression of being rocked at sea.

Some of the scenes work better than others, but overall it is wonderfully inventive and the circus acts are introduced so seamlessly that it is easy to forget just how much skill is involved. At one point, one of the female performers walks across the narrow beam of the ship’s sail, as a tightrope, while singing. There are also some heart-stopping moments when a performer dramatically drops from the silks, slides upside down at speed from the top of a pole, or is dramatically thrown and caught by another member of the cast – their head just centimentres above the deck.

For teenagers who perhaps are reading the poem for the first time at school and feeling lost in the length and old use of language (after all it is the longest English poem), this performance might encourage them to look afresh and see the heart of a story that has fascinated readers for more than 200 years.