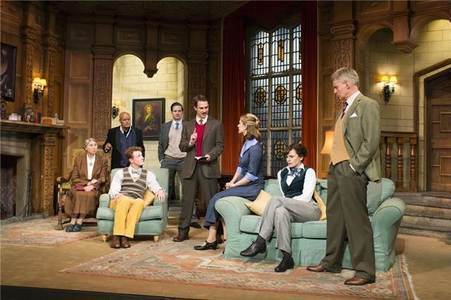 The Diamond Anniversary Tour of Agatha Christie’s The Mousetrap is already living up to the show’s tradition for longevity. Billed as the first ever UK tour (not counting some regional previews before going into the West End in 1952), the production is already in its second year on the road and has had a complete change of cast since stopping off at the Opera House in October 2012.

This time around Michael Fenner reprises his West End role of the laidback Italian, Mr Paravicini, but there aren’t any household names in the line-up. That doesn’t seem to have affected sales, judging by the almost full house at The Lowry. Agatha Christie’s mystery spinning is the real draw of the show and the cast is well able to provide the required suspense, as well as injecting some humour throughout. In many ways the characters have become caricature, but the production values are high and the sitting room set, where the action takes place, is grand and impressive, with wood panelled walls and an open fire.

So, what is it about this play that has earned it a place on the West End stage for more than 60 years? I can see the appeal to London tourists as something quintessentially English. For the audience on tour there is a curiosity surrounding the country’s longest running show. But perhaps the real reason it has stayed on the stage is because, if you like whodunnits, it is a good one.

Yes, it is dated, but it doesn’t feel uncomfortably so. Over time it has naturally become more of a period piece, like Poirot or Miss Marple, although neither of these characters appears in this mystery. The setting for the drama is the Monkswell Manor guest house, which has been cut off after a terrible snow storm. By the interval any one of the characters could be the culprit, and I overheard a child of no more than ten, excitedly tell his parents who he thought might be the murderer and why. He hadn’t guessed correctly, but his obvious enthusiasm made me look at the production with fresh eyes and think, if the show can still excite a new generation perhaps there are a few more years in it yet.

The Mousetrap, the Diamond Anniversary Tour is at The Lowry from 17-22 March 2014.