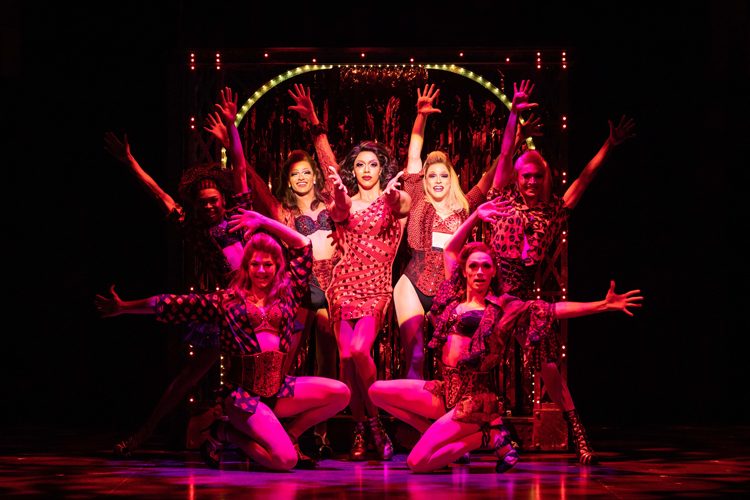 These boots weren’t made for walking, but they sure know how to get an audience on its feet.

Thigh-high, ruby red and dazzling with glitter – the Kinky Boots get a round of applause all of their own.

These aren’t just shoes, they are, as Drag Queen Lola cheekily describes them: ‘two-and-a-half-feet of tubular sex’.

And that’s where the kinky part ends (this is musical theatre after all) because at its core this is a fun, feel-good, heart-warming show about community, friendship, and acceptance.

The musical was inspired by a true story of an ailing shoe factory in Northampton, which turned its fortunes around by focusing on a niche market – shoes for men who dress as women. And as Lola bitingly informs us: these sassy numbers are for drag queens who look like Cleopatra and not transvestites who ‘look like Winston Churchill in his mother’s knickers’.

The original idea came from a BBC documentary, which inspired the 2005 film ‘Kinky Boots’ and in 2012 became a musical that has gone on to win awards globally, including best musical at London’s Olivier Awards and the Tony Awards in America.
While the musical has the same uplifting message as the film, Harvey Fierstein’s book is tighter, and Cyndi Lauper’s mix of pop and rock music gives the story an energetic lift that pulls everyone up with it.

The set, while an impressive mix of steel girders and stained glass of the old factory, is largely static and given life by wheeling on numerous props including a raised central revolve that is transformed in the shake of a glitter curtain from a factory office to drag club stage.

Although there is a nice story and some foot-stomping tunes to carry it along, the production relies heavily on the strength of central character, Lola, and on this UK tour we’ve got one of the best in Callum Francis.

It’s a role he’s already played to award-winning acclaim in London, Australia and soon to play on Broadway. Now back on home turf the Manchester born actor, is every inch of his enviable long-legs a star; commanding the stage whether in full-on sass and brass mode as Lola or in his more vulnerable moments as Simon from Clapham.

Francis is supported by a strong cast, particularly Joel Harper-Jackson who brings a sweet humanity and great rock voice to Charlie Price, the reluctant factory owner whose inherited his family’s struggling shoe business, and Paula Lane (best known as Coronation Street’s Kylie Platt) who does a brilliant comedy turn as factory girl, Lauren.

As the factory rolls out its new designs the audience rides along on a conveyor-belt of glitter and giggles. Yes, we have our emotions manipulated along the way, but who cares when it’s this much fun.

Kinky Boots is at The Opera House, Manchester from 12 November – 1 December 2018 and touring til April 2019. For full tour details visit kinkybootsthemusical.co.uk