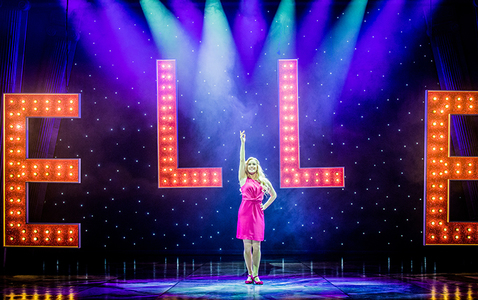 It’s pink, fluffy and even has two puppies – Legally Blonde is as sweet and light as candy-floss, and OMG, you guys, this is the last week of the tour!

This tour is just as much a crowd pleaser, with the audience jumping to its feet in appreciation at the end of the night.

Everyone knows what is going to happen, but the fun is all in the telling. Elle is so smitten with boyfriend Warner that when he dumps her because she’s not serious enough, she follows him to Harvard Law School to prove him wrong.

The characters are broad-brushed, bordering on cartoonish, and the set matches them in one-dimensional, vibrant boldness. As times move on, there are things we could pick at in the story, such as Elle’s ‘gaydar’ outing a man on the stand because he doesn’t fall for her eye-popping, bend-and-snap movement. But even here there is an innocence in the telling that keeps it tongue-in-cheek, opening to a big, camped-up number – Is he gay or European?

There’s also a strange mix of 1950s values and present-day references – the privileged Elle lives next to Simon Cowell, and there are some celebratory flossing moves in the final courtroom scene. But in this fictional land what matters is heart, and this show has plenty of it.

Lucie Jones has the audience on side at every step as the Malibu cheer-leader, Elle. She’s perhaps best known for being an X-Factor finalist in 2009 and the UK’s Eurovision entry for 2017, but she is also a strong talent in musical theatre. Elle is a role she’s played before at Leicester Curve in 2016, and, coming to the end of the tour, she is confident and still bouncing with energy. Jones has a clear voice, good comic timing and a radiance that gives the impression she’s constantly smiling.

Tiny chihuahua Bruiser steals the limelight with every appearance. And the happiness of this bright, pink, fluffy show is infectious, with even Rufus, the supposed brutish bulldog, beaming a wide doggy grin as he crosses the stage.