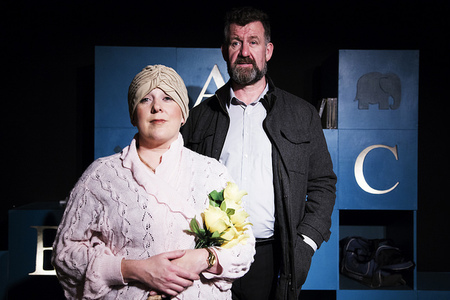 When we meet Noel Lynch he looks like your average 50-something man, but like novelist, Maeve Binchy who created him, he’s a born storyteller. And as he takes us back 25 years, we are about to find out, all is not always as it seems.

Noel rewinds to a life-changing phone call asking him to visit Stella on the oncology ward of the local hospital. The pair spent a drunken night at a festival. Now she is about to give birth and says he’s the dad. Stella knows she doesn’t have long to live and wants Noel to look after their baby, a girl she’s called Frankie.

There are many laughs as Noel recalls his early attempts at caring for a baby. He fusses and frets asking when testing the bath water: ‘Is a man’s elbow the same as a woman’s?’ But behind the gentle humour, Noel is not simply a man left holding the baby – he’s an adult child, who lives with his parents, drinks far too much, and is about to grow-up fast.

In the book, Binchy gives a rich picture of community life with most of the village helping in some way to mind the child. Shay Linehan’s adaptation gives glimpses of this, but distills the essence of the story into a struggle between two characters, Noel and social worker, Moira Tierney for the welfare of the baby.

Linehan’s adaptation can’t tell the full story on stage but it does capture the warmth, humour and generosity of Binchy’s 2010 novel. Actors Steve Blount and Clare Barrett do a terrific job in creating between them a whole host of characters, on a minimal ‘Play School’-type set, while keeping the audience focused on developing a rounded view of Noel and Moira. Through them we see the characters’ flaws but also their hearts and best intentions. Being open to change is an uplifting message.

In some ways, it is a rosy-coloured view that some will find unrealistic. But it’s also a generous one in which there is no straight-forward good or bad, just people struggling along, making mistakes and learning to live with them.

Life is complicated and people mess up, but in this new life – baby, Frankie – is hope that things can be better.