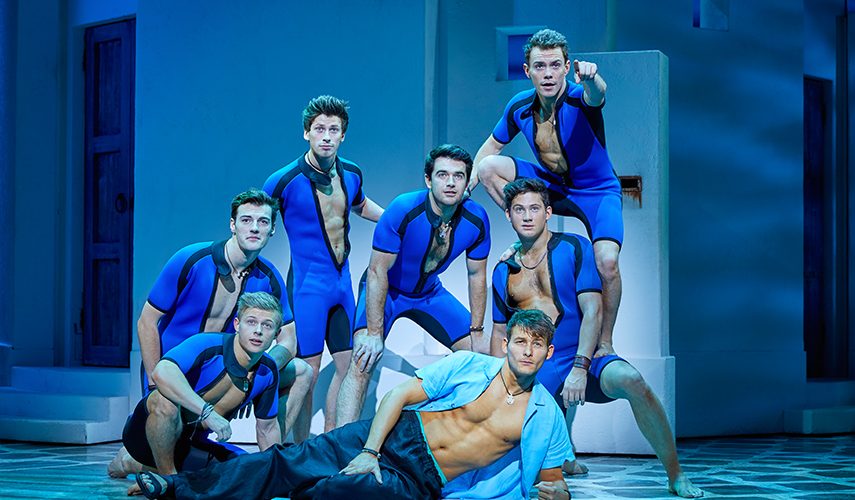 It’s more than 10 years ago since I first saw Mamma Mia! and I’ve lost count of the number of times I’ve seen it on stage, at cinema and on TV since then. But as the band strikes its first note, ABBA’s feel-good, disco beats hook me right back in, like the first time.

Judging by the response of the audience, I’m far from the only one in it for the umpteenth time and still excited. If you want to see a show that’s become a phenomenon, this is it.

There are no big names in this current touring production, but with this show now it’s fair to say the music is the star. It’s a slick, fast-paced show that keeps the energy high and the story moving – even though by now probably 99% of the audience know what happens.

Sophie (Lucy May Barker) is about to marry beach-body hunk, Sky (Phillip Ryan). There’s only one thing missing from the happy day – her father. Sophie doesn’t know who he is, but after stumbling across her mum’s old diaries she finds he could be one of three men. Believing she’ll recognise her father on sight Sophie invites all three men to the island for her big day. But she’s about to find out, life is never that simple.

Oblivious to her daughter’s plans, mum Donna (Shona White) is reliving her own youth with old friends, Rosie (Nicky Swift) and Tanya (Helen Anker), dressed up to the nines in platform heels and sparkling flares for a reunion of their girl band, Donna and the Dynamos.

Shona White makes a believable, Donna. Wearing blue dungarees and a tool belt, she looks like she really does know how to handle a drill. Nicky Swift as Rosie (the Julie Walter’s character in the film), plays the fun friend but keeps the comedy low key, leaving the big laughs to Helen Anker as Tanya, who brings the house down with her cougar beach scene to, Does Your Mother Know.

Lucy May Barker has played Sophie before in a previous tour and makes it her own to the extent that when watching you easily forget the long-line of other actresses who’ve taken on the part. For such an iconic show, that’s no small feat.

Throughout the show, shoulders were shaking and feet were tapping as the audience were itching to get involved. At the glam mega-mix finale, everyone is on their feet dancing before leaving on a high.

Mamma Mia! is at the Palace Theatre, Manchester from 3-14 July 2018. See website for details.