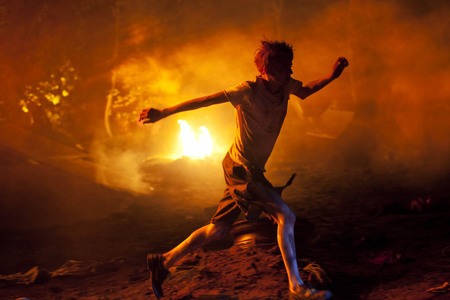 Lord of the Flies

There are many stories that have an element of shock value, but few that are so deeply shocking they stay with you a lifetime. William Golding’s novel, Lord of the Flies is one of them. It is decades since I read the novel as a young teenager yet I still remember being horrified as the story moved from adventure to savagery, bullying to murder.

This dramatic representation brings Golding’s 1954 novel to life with a powerful force that is a credit to everyone involved. The story of a group of school boys stranded on a desert island when their plane is shot down during wartime was originally written as a reflection on the brutality and violence of the Second World War. Nigel Williams’s adaptation brings it up to date with references to Instagram, 3G and I’m a Celebrity Get Me Out of Here, which no doubt will help the youngsters in the audience to relate in a new way. As it arrives in Salford, the UK’s political situation, with Parliament due to vote on military action in Syria, also adds a chilling dimension to talks of bombing and the idea of young children being caught up in the fallout.

Jon Bausor’s striking design sets the scene without need of explanation. The snapped tail of a BA Boeing 707 takes up half of the stage; there is an aeroplane wing on the other, while luggage and clothing are strewn across the stage with a jungle backdrop and a beach at the front of the stage. Under Timothy Sheader’s direction the smashed plane becomes an adventure playground which allows for action at different levels and a fast-paced movement on stage that adds to the energy of the performance.

At first it feels like a game, with children putting swimming costumes and bikini tops over their school uniforms, so the boys’ descent into savagery, led by the malevolent Jack, initially has a playful feel – the bare chests, spears and tribal make-up just another step in dressing-up – until it quickly turns into something much darker.

The young cast bring a believable innocence to the action. There is a mixture of some quite experienced actors, like award-winning Luke Ward-Wilkinson, who brings a heart-felt sensitivity to the role of Ralph, the upturned leader of the group who is trying to keep a hold on some form of civilisation, and others who are making their professional debut, like brothers, Fellipe and Thiago Pigatto, giving confident performances as the twins who speak together. Connor Brabyn gives an impressive and measured performance as anarchist leader, Jack, while Anthony Roberts shows genuine vulnerability as the sensible yet bumbling Piggy.

Through the pounding of tomtoms, uncontrolled flames and demonic chanting, we are drawn into this chaotic world that presents us with a powerful insight into the human condition, which although sadly no less relevant today, thankfully isn’t any less shocking.