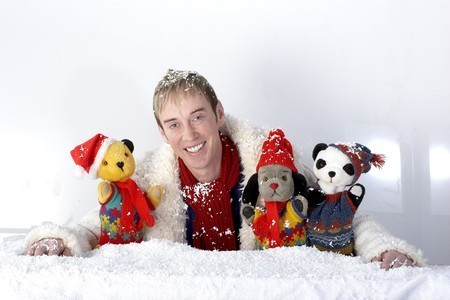 When a children’s TV show has survived the generations, like Sooty, there has got to be some magic in it. The presenters have changed, of course. And after being in the Corbett family for 50 years (first Harry then his son Matthew), it’s now fronted by presenter Richard Cadell, who bought the rights to the show in 2008.

Of course, good as any of the presenters are, it’s the orange bear that people want to see. And at Winter Wonderland the children are able to get up close and personal, taking up the prime floor space right in front of the stage. A dance competition for little ones warms them up, so by the time Sooty, Sweep and Sue take to the stage, there are shrieks of excitement.

Even when we know it’s just his hand, the show is just as much fun as a nostalgia trip for grown-ups. When Cadell asks, ‘Did you have a good time?’ the woman beside me shouts, ‘Yes!’ and then sheepishly turns to me adding, ‘I really did. I love Sooty.’

It’s a safe and gentle introduction to theatre for little ones, with a meet-and-greet with Sooty and Richard after the show. In the Winter Wonderland event hall there are other theatrical treats too, including a magic show, big top circus and Disney princesses performing songs from Frozen to the backdrop of wintry scenes and falling snowflakes. There are also more than 40 fairground rides and a visit to Santa and his reindeer included in the entrance price. For anyone with young children it’s a fun-packed Christmas day out.