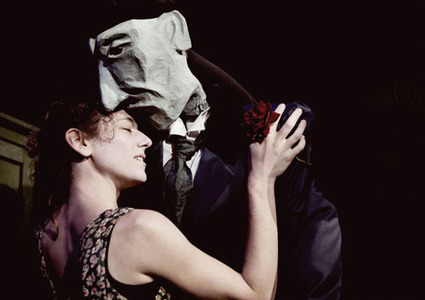 Louise is a dynamo of energy. Her mind is a whirr, her heart beats loudly and she doesn’t sleep. She lives in a frenetic, fantastical world where her bed becomes a wardrobe, coats become seductive strangers, stools dance and lamps tilt their bulbs ever so slightly as if listening in on the conversations between the weird and wonderful characters that meet in her studio.

Only we soon learn that this isn’t an artist’s studio, it’s a room in a psychiatric hospital and Louise is an inpatient being treated for bipolar disorder.

Developed from personal experience of bipolar disorder and medical research with the North East London NHS Foundation Trust, the play is being used as a vehicle to approach the subject of mental illness in a non-didactic way. That all sounds very worthy and more than a little dull, but this production thankfully is neither, succeeding in walking that tricky tightrope of entertaining without trivialising the condition.

Indeed the theatre is a great medium for exploring the mind of the fantasist, as Louise is called here, because we are with her from the start. We are already suspending disbelief, entering a world of make-believe and pretending that we can’t see the people dressed in black on stage working the puppets. In this respect the audience’s sense of what is real and unreal is blurred, just as it is for the central character. Her world only seems odd when the nurse comes in to calm her down, or her friend visits and can’t keep pace with Louise’s flying thoughts.

The puppets, developed by War Horse’s Robin Guiver, are mesmerising and used here to great effect. There is the tall seductive muse, who gives Louise the energy and inspiration to paint, the tiny squeaking mannequin who breaks her concentration, the deformed heads who prey on her anxieties, and the crawling green goblin who envelops her in his dark cloak to destroy her creativity.

As the fantasist, Julia Yevnine gives an energetic performance, flitting convincingly between extreme highs and lows of emotion. This is her world. As she describes it: “It is like I am playing ping pong on a train and you are watching from outside. To you it looks like I’m moving very fast, but to me­ – I’m just playing ping pong.”

The Fantasist from Theatre Temoin and Cie Traversiere was at the Lowry on 23 June 2013.