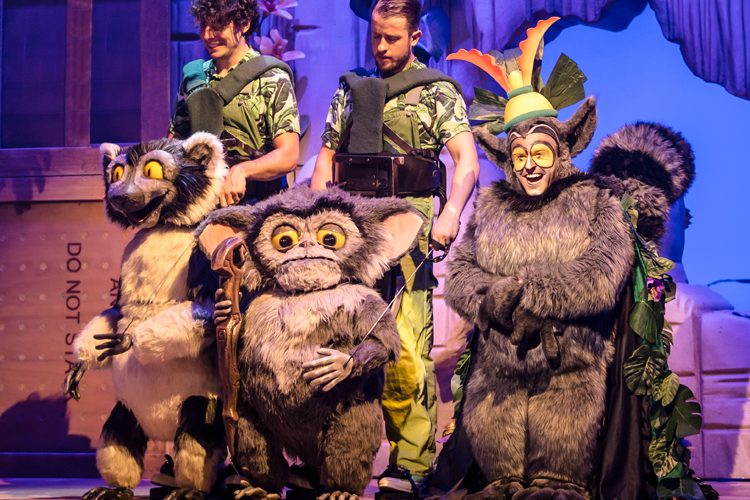 X-Factor winner 2016, Matt Terry is king of the jungle.

This isn’t the Australian celebrity kind you might expect. Rather fame has catapulted the singer, not to further reality TV stardom but into the leading role of a new family stage show, Madagascar – The Musical.

That’s the thing with TV talent shows. One minute you’re queuing up with thousands of other hopefuls. The next, you’re given top billing on your acting debut. It’s sink or swim.

Thankfully Matt can genuinely sing. His clear vocals lift the pop sound of Madagascar to something special, treating us to an impressive falsetto. He’s got the brawn for Alex the lion as well, even if much of the muscle is costume padding. And hopefully as the run continues he’ll grow in confidence too.

We’re seeing the show towards the start of the run and Matt’s limbo dancing lion, still feels a little tame. That said, dancing round in a full-on lion suit can’t be easy and Fabian Aloise doesn’t reign in the choreography – even having Gloria the hippo (Timmika Ramsay) doing a booty twerk and the splits.

Based on the 2005 Dreamworks film of the same name, Madagascar – The Musical brings to the stage all the character favourites in a mix of costumed-actors and puppets. The story is very similar too. Marty the Zebra is celebrating his 10th birthday with his friends in Central Park Zoo. Hitting a mid-life crisis he starts to wonder if there isn’t more to life, and how he wished he could go out into the wild.

His wish is granted with the help of some cute penguins. So, the adventure of freedom begins, taking Marty and his pals on the New York subway, across the ocean to a Paradise Island run by Lemur, King Julien.

It’s here that the show gets a real party injection, with all the animals flossing to a show-stopping, Move it, Move it!

Jo Parsons, King Julien – entering on his knees like Lord Farquaad in Shrek the Musical (another Dreamworks picture) – has all the comic timing of his Shrek equivalent without the smut. His put-downs are hilarious, as he tells Mort to not just eat his words, but chew and digest them.

Antoine Murray-Straughan keeps the energy high throughout as Marty the rapping zebra, while Jamie Lee-Morgan mixes costume and puppetry to brilliant effect as Melman the hypochondriac giraffe.

The action takes place on a fairly simple set, boxed-off by wooden crates. They are the type in which the animals make their sea journey, and stay on stage the whole time, which can feel a little static. However, the show itself never stands still, with puppets, actors and music all working together to bring the story vibrantly to life.

My 6-year-old theatre buddy was hooked from the off and dancing all the way through. If you’re looking for a show to get the family movin, movin, this is it.

Madagascar – The Musical, from producers Selladoor Family, is at the Palace Theatre, Manchester from 14-18 August 2018. For tour and booking details visit www.madagascarthemusical.co.uk