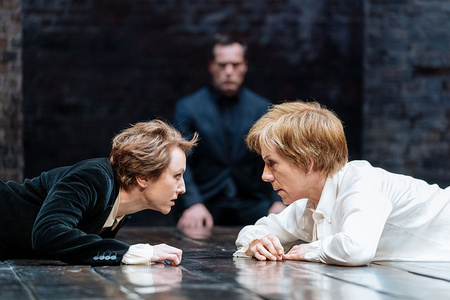 At the toss of a coin the company decides on stage which of two actors will take the crown as Elizabeth I and who will lose her head as Mary Stuart.

This device, more a spin than a flip, is magnified on screens around the auditorium, while Juliet Stevenson and Lia Williams stand in front of the royal courtiers, face-to-face at either side of the stage, dressed in identical costumes of trouser-suit and white shirt.

It is both a simple and remarkable theatrical device. Simple for the element of suspense it injects from the start, and remarkable in the layers it adds to the characterisation, and more so the skill and depth of acting it demands from its leading actors.

On Tuesday night at The Lowry, Stevenson called heads and won the role of Elizabeth, while Williams played her prisoner, Mary. It is testament to the tremendous performances, that it’s hard to imagine the roles reversed, and more astonishing to imagine either actor going on stage not knowing which of these two huge parts they are going to perform.

Stevenson is imposing, angular and at times ferocious as England’s Queen, whereas Williams’ smaller frame and fluidity of movement make her a more sympathetic victim of fate as Mary, stripped of her royal title and any privileges that ever came with it. In this play she wins the moral if not the physical victory and history too has restored her position as most will know her as Mary Queen of Scots and mother to King James I of England, also James VI of Scotland.

Of course, this is drama and much dramatic license is used to create an absorbing, political thriller, which at its highest stakes plays with life and death. There is a fictional meeting between the two which dissolves into a kind of cat fight. There is an uncomfortable level of misogyny throughout that no doubt existed to a greater degree in the sixteenth century, which makes these two women more remarkable. However, the often overt sexualisation, references to their looks and the deep rivalry over Leicester (John Light), did leave me wondering how the story would play out had it been written and interpreted by a woman.

The action plays out on an almost bare circular stage, enclosed by two brick walls, with effective use of sound adding to the tension by Paul Arditti and a beautiful composition by Laura Manning running up to Mary’s execution. The only extravagance in the staging is the final costume of Elizabeth – a white painted face and the restrictive regalia we’ve come to recognise her for in portraits – as she circles, clown-like, playing to the will of her subjects.

Creating an absorbing thriller when the audience knows the ending is a master-stroke in craftsmanship. Issues of political infighting, international relations, isolation at the top, fights for justice, shifting blame and responsibility onto others and often onto a higher power, and the fickle hand of fate, are as pertinent today as they ever were.

It’s a gripping three-hours that hits you from the start and never stops – don’t miss it.