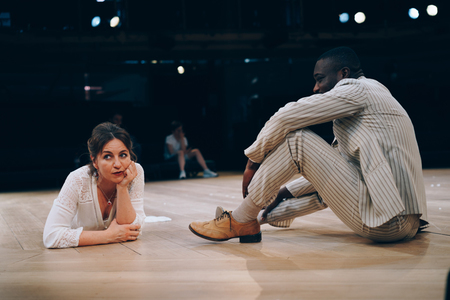 At a time when Cold War rivalries are re-emerging, we could once again be facing a period of history where Russia appears a very different land.

A new translation of Chekhov’s final play, The Cherry Orchard, by Rory Mullarkey promises to be truer to the play’s Russian roots than we may have seen before in this country.

Mullarkey is a Manchester boy and the youngest playwright to be staged in The Royal Exchange’s main house with his debut, Cannibals. However, he brings an authenticity to the production having studied Russian at Cambridge and for a time in St Petersburg.

Former RSC Artistic Director, Michael Boyd directs. He too studied Russian and trained as a director in Moscow. Given his experiences and declared love of Chekhov’s plays, it feels surprising and significant that this is the first time he’s directed one of the Russian master’s works.

What emerges, however, is not a portrait of a foreign land, but a re-telling of a story first performed thousands of miles away in 1904, with a range of characters not so different in their concerns from many people we know today. Some things never change, no matter how much we like to think they do.

This is the great strength of familiarity, and of this production. It is not the differences, but the similarities that strike us. Each character is well-drawn and complex. As they each relate to the onset of change in a unique way, we see a picture of humanity that reminds us how people, even those who grow up in close proximity, relate to events and their environment in completely different ways.

At the centre of all this emotion stands the magnificent cherry orchard, but even it cannot weather what is to come. In Boyd’s pared back production, a few petals of blossom fall to the floor, but we don’t see a single tree. Bar a slow central revolve, there is very little staging, throwing all the attention onto the characterisation and performances.

Kirsty Bushell brings a sympathetic edge to the self-indulgence of aristocrat, Ranyeyskaya. We first meet her kissing the floor of her former nursery and imagining she sees her late mother waving between the trees. At the same time, the distant sound of a running stream and the ghostly figure of a young boy, are a constant reminder that her memories here, however privileged, are not all rosy. Ranyeyskaya has returned to sell the grand estate, because her fortunes are dwindling. She had left for Paris six years earlier following the death of her husband and shortly after the death of her 7-year-old son, who drowned there.

Lopakhin, whose parents and grandparents were serfs on the land, views the orchard in a completely different way. Now a successful businessman, he too is haunted by memories, those of slavery. Jude Owusu does a fine job at emphasising Lopakhin’s energy and practicality, while allowing to surface a cold brutality and bitterness that sometimes fuels it.

Chekhov described his play as a comedy in four acts. For a 21st century British audience, while there are moments of humour, it feels a sombre watch. Yet while we may browbeat over the state of the world and stand in trepidation over what is to come next, perhaps we can take solace in the play’s intellectual voice of reason, Trofimov. As he self-righteously declares, ‘I am above love’, the innate comedy of life surfaces. To take it too seriously can only bring ridicule.

The Cherry Orchard is at The Royal Exchange, Manchester from 19 April to 19 May 2018.