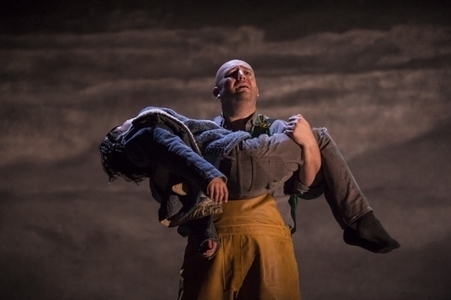 Nothing beats opera for dealing with extremes of emotion, and as themes go they don’t come much darker than the child abuse and murder at the centre of Peter Grimes.

Jeffrey Lloyd-Roberts’ Grimes is, on first appearance, an imposing, monstrous figure. It is easy to see why the town’s people are so quick to believe that this fisherman is responsible for the death of his apprentices. Yet, despite glimpses of his brutality, the audience can never be certain that Grimes is indeed the murderous villain he is painted.

It is this level of uncertainty, the ensuing hatred of the church-going community towards him, Ellen’s continued love (sung with beautiful clarity by Giselle Allen) and Grimes’ growing isolation that makes the story so fascinating and compelling.

Lloyd-Roberts sensitive performance captures the complexity of this character as he swings from a menacing presence to gentle lover then back again, all the while building towards his dramatic descent into the psychotic state witnessed at the end.

Director Phyllida Lloyd returns to her award-winning 2006 Opera North production for the company’s celebration of Benjamin Britten’s operas, of which this is surely a highlight.

Her interpretation presents a diverse community which is at the same time both caricatured and real, with bright, brash and racy nieces (Jennifer France and Aoife O’Sullivan), a comical yet disturbing busybody in Mrs Sedley (Rebecca de Pont Davies), and a chorus that is as rousing as it is terrifying. There is also an added dimension in the relationship between Grimes and Ellen, which is more explicit than is often played, with a tender kiss between them in the first act.

In almost complete contrast, Anthony Ward’s set is as bare as the characters are colourful. The costumes are a ramshackle mix of late 20th century, non-descript clothing. Apart from the grey seascape as a backdrop and an impressive, all-encompassing fishing net, for much of the time there is little to fill the cavernous stage. In many ways this allows a focus on Britten’s evocative score, which conductor Jac van Steen delicately matches to this harsh seascape and the intense emotions played out on stage.

Grimes is a powerful opening for Opera North’s Benjamin Britten season at the Lowry and a triumphant revival for the company.