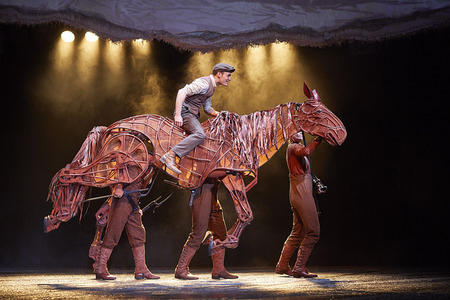 It’s the summer of 1912 and on a farm in rural Devon a drunken Ted Narracott (Gwilym Lloyd) has spent his mortgage money on a young foal, a mixed-breed that is neither rider nor plough horse.

For his wife, Rose (Jo Castleton) it’s another useless mouth the family can ill-afford to feed. For their son, Albert (Thomas Dennis) it’s a friend to take him away from the tensions of the household. And, so begins the love story of a boy and his horse.

Of course, the long-standing appeal of Michael Morpurgo’s War Horse is much more than this. But the central friendship holds it all together with an innocence, loyalty, devotion and peace so longed for in what was one of the world’s darkest hours.

This 10th anniversary tour of War Horse coincides with the Centenary commemorations of the end of the First World War. And in this wonderful story, rather than a them and us battle, through the shared love for a horse we see humanity on both sides and the futility of their fight.

The 34-strong cast make for some imposing scenes, heightening the drama through sheer numbers and song. The action is fast-paced, moving from a horse-market to a ploughed field; the open sea to the confines of the trenches; an occupied farm to a military hospital. The changing scenery is created through minimal set design and effective use of lighting and sound. There is no doubt we are at war as the explosion of shells blast through the auditorium, coupled with blinding lights and flashes of debris. There is also a spectacular tank.

Designer, Rae Smith aids the storytelling through a series of related sketches and animations shown overhead on a screen resembling a torn-out page from the sketch book in which Lieutenant Nicholls (Ben Ingles) first captures the galloping freedom of Albert and his horse, Joey.

What was ground-breaking puppetry work in 2007 is still breath-taking today. Hearts leap when young foal, Joey bounds off stage and back on again, transformed as a fully-grown horse. South Africa’s Handspring Puppet Company bring the horses, geese and birds of the play to life with detailed movements. From the rise and fall of the chest to the shaking of the ears, we come to feel for Joey and his fellow war horses as if they were real.

As Joey grows so does Albert, and Thomas Dennis gives a sensitive portrayal of a sharp coming of age at the hands of battle. Despite his steely determination Albert never loses his big heart and Dennis captures this emotion with every interaction. Yet it is his skill to bring emotion to the relationship between man and horse that tugs uncontrollably on the heart-strings.

Joining him on this emotional ride it’s easy to see why War Horse has become a phenomenon and the most popular play in the National Theatre’s history. Believe the hype – 7 million people and counting have seen it because it takes you on a ride you’ll never forget.