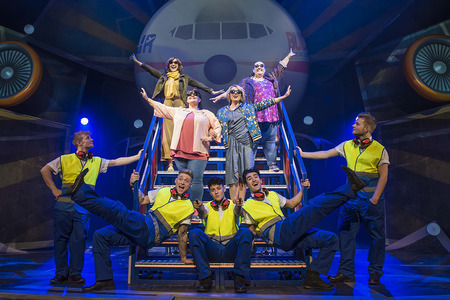 The music of The Band needs no introduction – covering three decades of Take That hits, each one instantly recognisable. Neither do its young stars, the winners of TV talent show Let It Shine.

So far, so predictable. Then Gary Barlow throws a curved ball to his fans, putting the spotlight on them and creating a story that has all the ingredients to make it the new Mamma Mia.

Yes, in one sense it is a jukebox musical. But, like Mamma Mia, it is so much more. At its heart is a celebration of female friendship that sees women screaming for the band as the show begins and hugging friends as they leave.

Writer Tim Firth previously collaborated with Gary Barlow on musical The Girls, based on Calendar Girls. Once again, the story has heart, but the familiarity of the Take That songs and the spectacular, pop-concert staging give this show the wider appeal necessary for an instant hit.

The young singers, Five to Five, inject a vibrancy that lifts the energy and gives the audience what they expect – a nostalgia trip of reliving a Take That concert on stage. Then, with the scene set, the focus switches to the fans – five 16-year-old girls. The songs form a soundtrack to their lives, making for some inventive comic scenes as the boys pop out of bedroom drawers and school lockers.

This is where the formula wins. Rather than shoehorn songs into a story, Firth weaves them through the narrative like a soundtrack.

The parallel to Take That is The Band’s comeback, 25 years on, which is a catalyst for the friends, who had lost touch, to reunite and discover what happened in the intervening years.

As well as introducing Five to Five – Curtis, Sario, Nick and Yazdan – there are strong professional debuts from, Lauren Jacobs as Zoe and Rachelle Diedericks as Debbie.

Rachel Lumberg, Alison Fitzjohn, Emily Joyce and Jayne McKenna play the fans as 40-somethings with both an authenticity and lightness of touch that has everyone rooting for them.

The hype around whether the real Take That – Gary Barlow, Howard Donald, Mark Owen and Robbie Williams – will appear on stage for the finale has no doubt boosted ticket sales. And there was an unexpected bonus on opening night when Lulu joined three of them (minus Robbie) on stage to sing Relight My Fire.

On Tuesday night, the atmosphere in Manchester Opera House was electric.  But it is the warmth and humour that will keep audiences uplifted and coming back for more. It’s a winner.