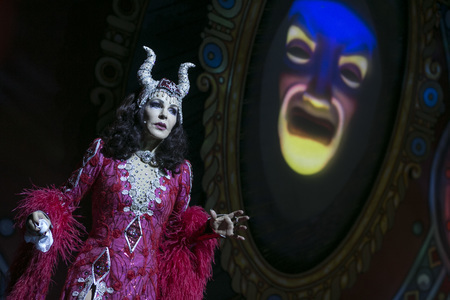 Snow White and the Seven Dwarfs

If there’s one thing you can be sure of about the star of Snow White – Priscilla Presley is not in it for the money. She returns to her role as the Wicked Queen, after making her panto debut in Wimbeldon last year, seemingly for the joy of it, and it shows.

Indeed the whole show is a delight from start to finish. There is a big screen countdown to curtain up and the excitement in the auditorium could lift the roof. The children are giddy simply at being in the theatre, and the parents are anticipating their first sight of a woman who is undisputed celebrity royalty, having being married to the King of rock ‘n’ roll, a regular on Dallas, a Hollywood box office smash in the Naked Gun movies, and a successful business woman as the co-executor of the Presley Estate. Such a roll call needs a dramatic entrance, and Ms Presley gets it. Suspended mid-air behind the magic mirror, she is revealed to be every bit as glamourous as we expected, wearing a full length sparkling gown with a thigh high split that provides a cheeky glimpse of a figure the envy of women half her age. It is easy to see that she was once indeed the fairest of the fair.

Priscilla makes a deliciously Wicked Queen, who is not afraid to send herself up singing the Elvis classic, Trouble. Her comedy timing wins her many more laughs than you might expect from the pantomime villain, and her attempt to woo the Prince (Philip Olivier) with teenage text speech is hilarious. But it’s not just the adults in the audience for which her character appeals. The scene where she gives Snow White the poison apple receives the biggest screams of the night from the young ones in the crowd.

For such a wonderful star, it’s great to see that she has such strong support around her. Comic Tam Ryan is brilliant as always. This year he takes on the role of Muddles. The frequency in which he appears in Opera House pantomimes even becomes a run-in joke on the stage, but it’s clear that he returns year after year, because it would be difficult to find anyone who can do the job better. I’ll remember his take on the internet sensation £1 fish song for a long time.

Warwick Davis as Prof is a popular and well-chosen lead for the Seven Dwarfs. His Freddie Mercury impression as part of Moravia’s Got Talent, a spoof of the TV talent show, is inspired. It would spoil the show to tell you about the different acts, but suffice to say when Tam Ryan quips that one of them is worth the ticket price alone, he is right.

There are so many memorable moments – Snow White (Natalie Andreou) singing Pharell’s Happy, and the forest Ghoulies doing Michael Jackson’s Thriller dance. This is big spectacle panto at its best. I loved it.

Snow White and the Seven Dwarfs is at the Opera House, Manchester from 5 December 2014 to 4 January 2015.