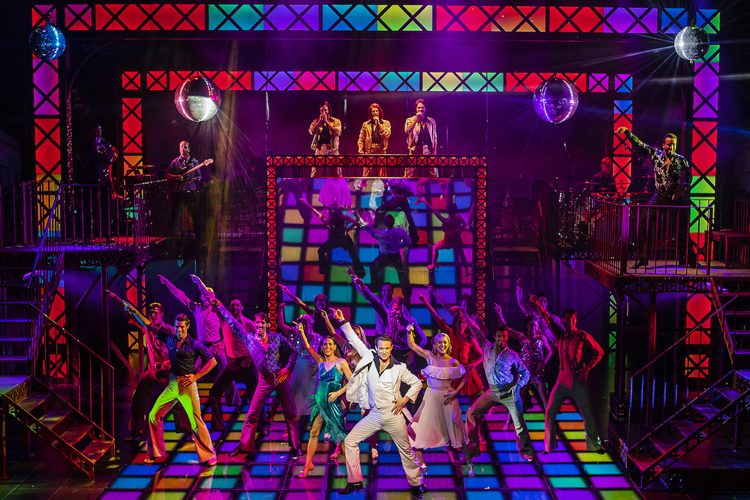 Looking back to the 1970s you can be forgiven for thinking it was all flares and fancy footwork.

But don’t be fooled by the happy disco grooves that define the decade. These were tough years, and Saturday Night Fever gives us the best and worst of them.

The film, a certificate 18, was both exciting and shocking on its release in 1977. More than 40 years on, parts of it are still a difficult watch and the stage version doesn’t shy from these.

Alongside the dancing there is violence, sexual assault, suicide, racism, homophobia, and no end of casual misogyny that to a modern audience is eye-watering. No-one escapes here unscathed as the church, specifically Catholicism, comes in for a heavy bashing too.

Perhaps part of the story could have been diluted for the 21st century, but then again it wouldn’t be Saturday Night Fever. If you know the film, you probably know what you’re getting. If not, be prepared for a sharp intake of breath in parts.

Following the sexual revolution of the 1960s, this decade is ripe for a battle of generations. In downtown Brooklyn, Tony Manero, the son of traditional Italian American Catholics, is at the centre of this confused new world. In his circle, Tony is leader of the pack and for the most part, he is a number one a-hole.

Being a complicated and not easily likeable character in a central role is a tough job and one Richard Winsor does incredibly well. He doesn’t gloss over his character’s flaws, but boy when he dances do we forget them. The 2001 Odyssey club is where Tony goes to forget the gloom of the streets, and once he’s on that lit dancefloor the audience quickly forgets it too.

Winsor is a terrific find for Bill Kenwright’s new prodution. Trained at the Central School of Ballet, he spent ten years as a principle dancer with Matthew Bourne’s New Adventures. As a forerunner to Dirty Dancing, his snake-hip moves and leaps are mesmerising. Many might know him too as Caleb Knight in BBC medical drama, Casualty. In Tony Manero he captures the complex emotions of life in the harsh world of 70s Brooklyn and the excitement of the disco with equal fervour.

Tony finally meets his match in Stephanie Mangano (Kate Parr), who is another one with big ideals and a mountain of front. As a team on the dance floor they are sensational.

The production is lively and slick, with fast moving scene-changes within a static frame of stained glass and metal. On this raised platform overseeing the action is the band with Edward Handoll, Alastair Hill and Matt Faull as the Bee Gees at the centre. While some song’s lyrics are directly integrated into the story, for the most part the music is a soundtrack to the action below. And what a soundtrack it is, including the massive hits, Stayin’ Alive, Disco Inferno, Jive Talkin’, Tragedy, and More than a Woman.

This show is all about the music. For the disco scenes a mirrored wall reflects the famous coloured squares of the dance-floor and huge disco balls placed around the outer balcony of the circle send shards of light shooting across the whole theatre. When the cast fill the dance floor, led by Winsor in Manero’s famous white suit you can sense the audience itching to join them.

For a moment we forget the crises of the day, and like Manero become lost in the pure feel-good joy of these disco classics. If this is what we remember most about the 70s there is a good reason why – a good boogie makes us feel alive.

Saturday Night Fever is at the Palace Theatre, Manchester from 22 – 26 January 2019.